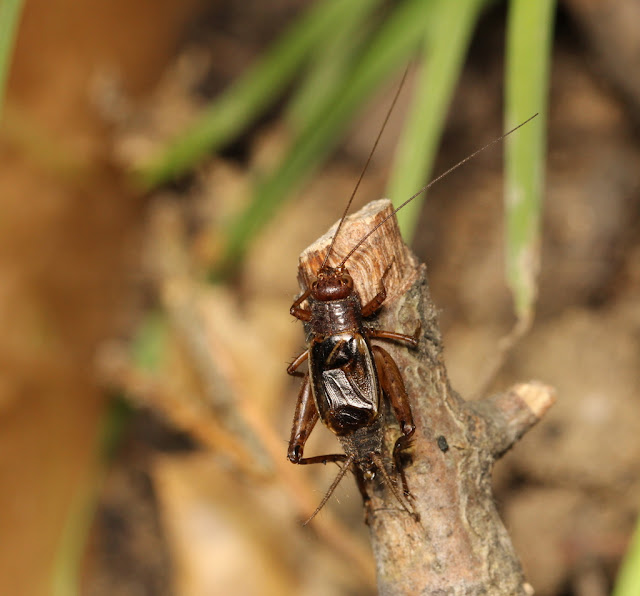 I love Allard’s Ground Crickets. To me, their songs are the audio equivalent of sparkling stars. Their tempo increases almost to a sonic blur when they’re out in the sun on a hot day, slowing in tempo on chilly nights to something more like "tink-tink-tink."

But they have a cousin whose song really IS “tink-tink-tink.” Appropriately, this cricket’s name is the Tinkling Ground Cricket (Allonemobius tinnulus).

Although the Singing Insects of North America range map shows them across most of the state, I haven’t found them in NE Ohio. Theirs is a special song I hear when I go significantly farther west along the Lake Erie shoreline, including to Kelleys Island, and I also hear them when I visit Buzzards Roost Nature Preserve in the Ross County Park District near Chillicothe in southern Ohio.


The range map has dots from the central and western lake shore, and quite a few from the central, south-central and southeastern parts of Ohio. There are no records from NE Ohio, and that seems right based on my experience. This could be a species that I simply will not find here. 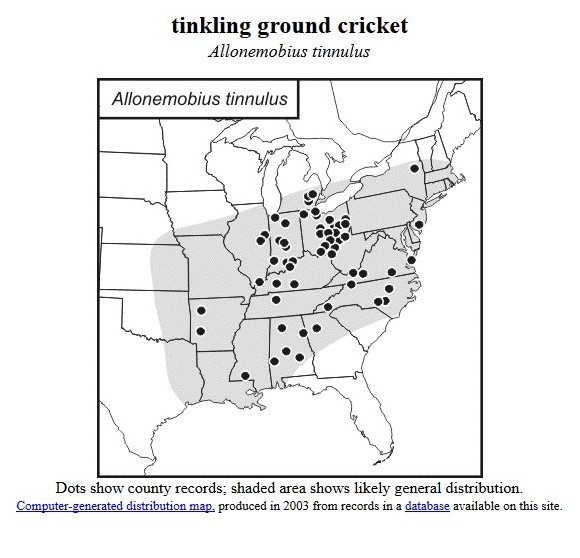 You probably want to hear - and see - how they compare with Allard’s Crickets. Let's start with the songs.

First, how fast can you say, “tink-tink-tink-tink?” It’s a single syllable, and you'll have to articulate each one. That’s the Tinkling Ground Cricket.


Now, how fast can you say, “tika-tika-tika-tika,” running all those syllables together continuously? A lot faster! (Brass instrument and flute players would call this “double-tonguing.”) That’s the Allard’s Ground Cricket.


Can a cold Allard’s sound like a Tinkling? Sometimes. Also, there are occasions when Allard's will sing a series of slow “tink-tink-tinks” before launching into the typical fast song. Those “tink-tink-tinks” can sound very much like an actual Tinkling Ground Cricket (and you may hear a Tinkling in the background of this recording).

Their habitats overlap a little, but Tinkling Ground Crickets are woodland inhabitants that aren't generally out in full sun. They seem to like the sandy soil of the western Lake Erie counties as long as it's a primarily shady location, while Allard’s can be found right out on sunny beaches among beach grasses, stones, and pieces of driftwood. Allard’s are also widespread in any relatively dry, open area from meadows to city lots.

How similar do they look? Pretty similar, though Tinkling Ground Crickets have redder heads and generally seem a little more rusty-colored. Here's an Allard's... 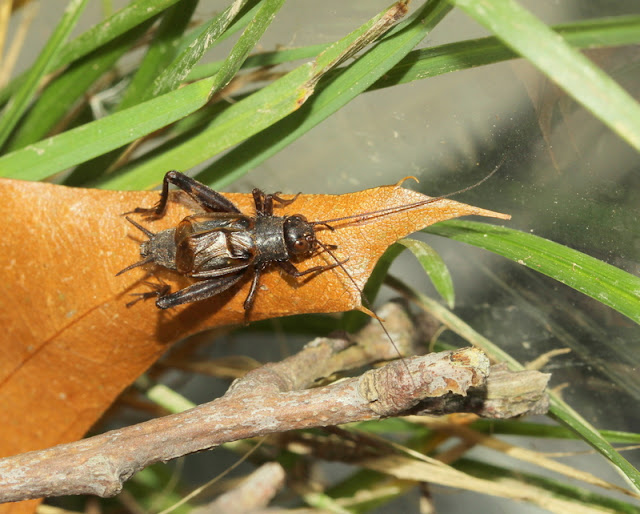 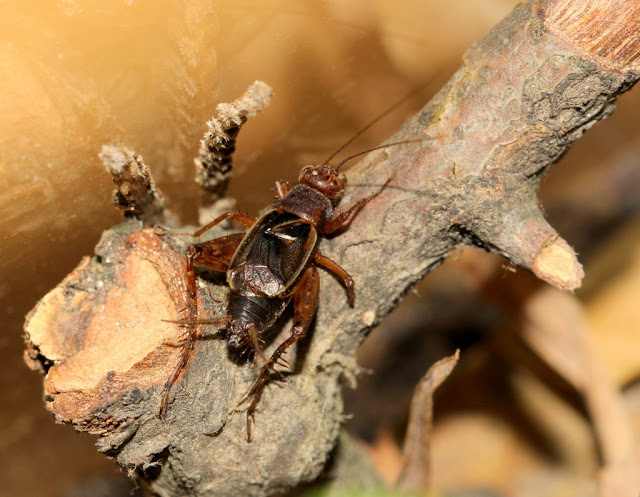 Tinkling Ground Cricket color can be somewhat variable. This photo is a Tinkling I met in NW Indiana who didn’t look quite as red, and I've seen a range of red to reddish brown at Oak Openings in the Toledo area of northwestern Ohio. 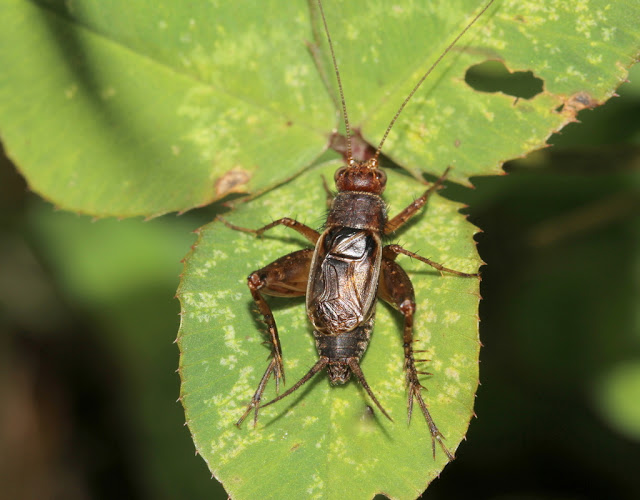 Although I'd heard them elsewhere, I didn’t find substantial numbers of Tinkling Ground Crickets until I went to the western end of the Lake Erie basin in the Toledo area. Suddenly, they were everywhere along shady paths, woodland edges, and in the open, sandy woods! They were the most common cricket present in those habitats. Their song tempo varied with the amount of sun in which they were located. In this next recording, you'll hear them first on the sunny side of a sand dune area, then nearby in the shade. 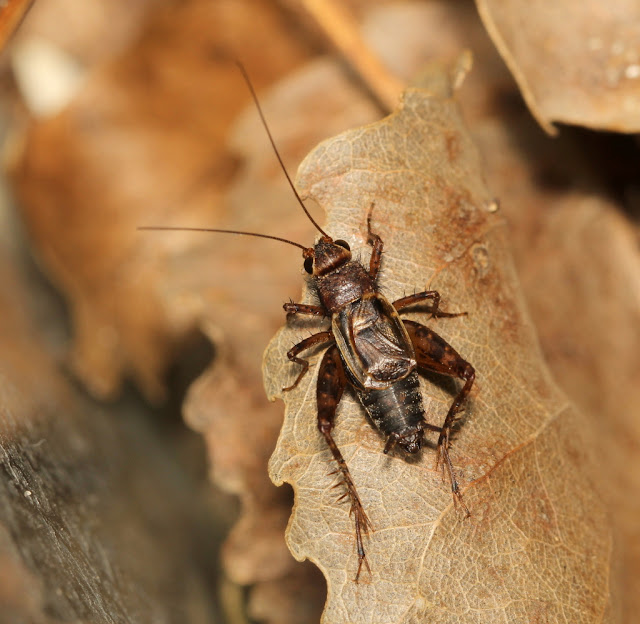 Their pitches aren't too far apart, but the complexity of the sound gives the Spotteds a very different tone quality. If you hear both in an open, dry woodland, you’d want to listen for the different tone quality rather than a different tempo or rhythmic pattern. Listen, too, for the more distinct separation between the “tinks” in the Tinkling Ground Cricket songs.


As I typically do in October, I brought home some crickets just ahead of a couple of cold fronts that sent temperatures down into the 30s at night and only up into the 40s during the day. Our new household residents include a few Tinkling Ground Crickets who are now living in the warmth and safely of a terrarium in the kitchen. They have sandy soil, scattered low plants and grass, and open areas with small stones. Dry oak leaves provide hiding places, and twigs are frequently-used perches. 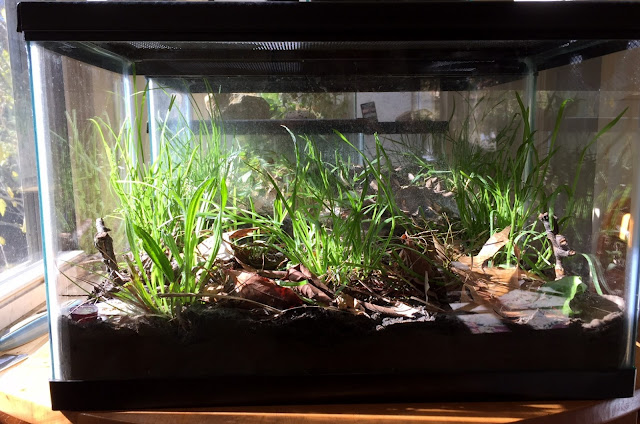 Using photos of my kitchen residents to illustrate, here's a quick review of these three species and some general guidance to your choices. There's a recording beneath each photo.

Open and sunny: Allard's. Remember that they may occasionally sing a slower song, then speed up to a more typical tempo. 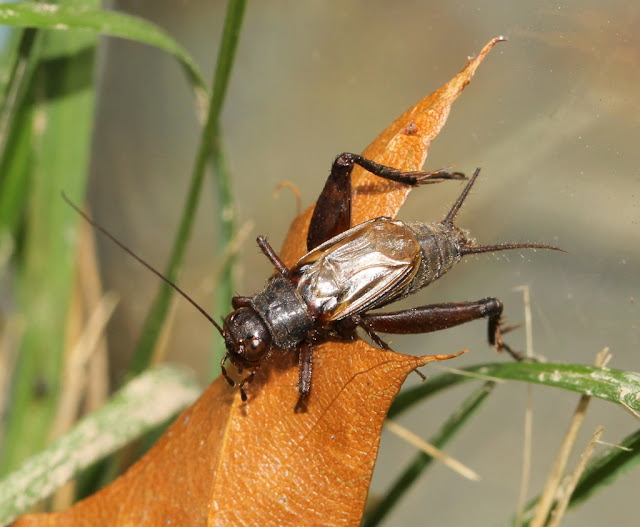 Woodlands and edges, even in sand: Tinkling (female pictured below). 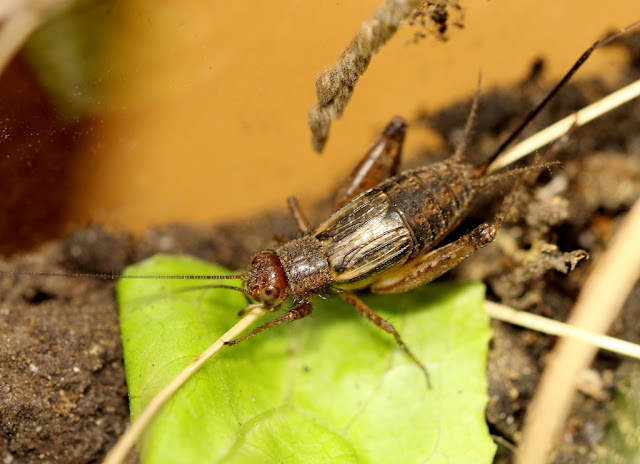 Dry, open woodlands and edges (even in sand) with some dead wood and dry leaves on the ground: Spotted (female in photo below). 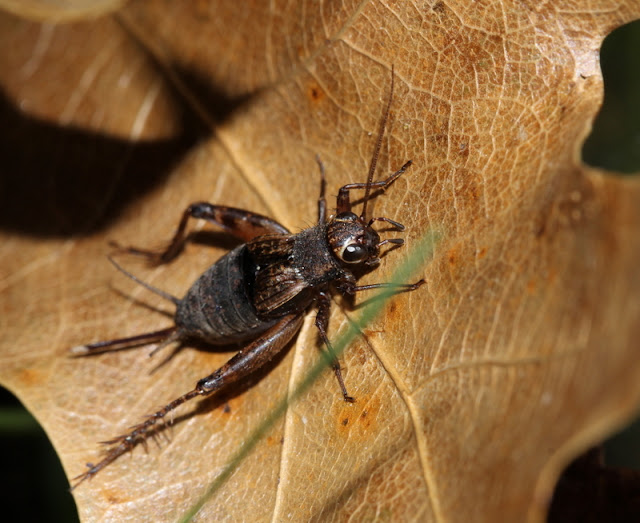 If you’re here in the NE Ohio snow belt counties, Allard's are widespread and Spotteds will be an unusual find.  As for Tinkling Ground Crickets…well…better plan to travel. 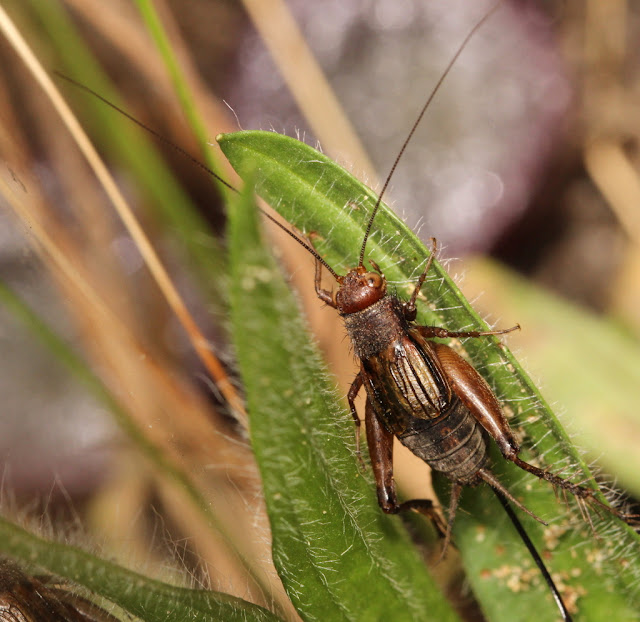 Posted by Lisa Rainsong at 7:14 PM