Has anyone seen me? 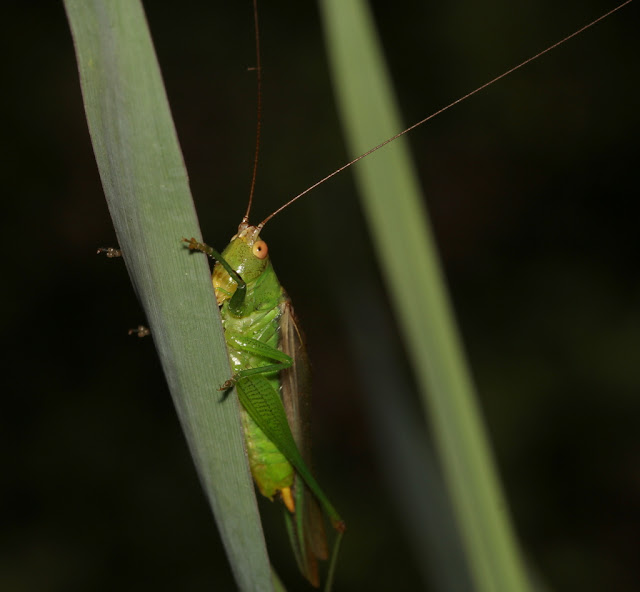 I’m looking for a katydids that I haven’t yet seen or heard in Ohio. Are they still here?

These meadow katydid species are in the genus Orchelimum and I found them listed in the Singing Insects of North America web site: Dusky-faced Meadow Katydid, Nimble Meadow Katydid, Delicate Meadow Katydid, and Striped-faced Meadow Katydid. They've been recorded in northern Ohio in the past, and some have been quite common. So far, however, I can’t say that I’ve seen or heard any of them. There’s been so much habitat loss and general degradation - especially of wetlands – that their previous concert stages may have been destroyed by now. Still, it seems that some of them must be here… somewhere…

But how will I know what I’m looking/listening for? Sometimes, there are photos and recordings. Other times, there is one but not the other. And occasionally, there’s a record of a species being present, but neither a photo nor a recording to reference.

Where do I even start with this?

The Dusky-faced Meadow Katydid, Orchelimum campestre, would be the most common of the species I haven’t yet found. Here’s the map from Singing Insects of North America: 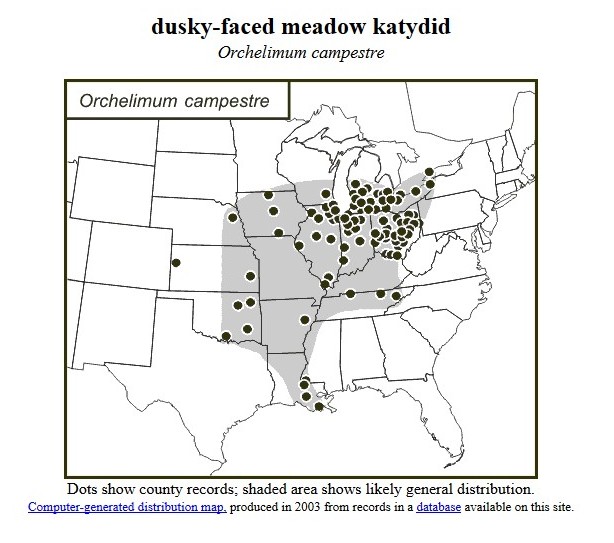 These records don’t tell us where the katydids are right now, though. Since Ohio has lost up to 90% of its wetlands, I have significant concerns about finding these insects where they once lived. Wetlands are being created and restored, which is wonderful. However, do these areas still have katydids present that can move into a new home?

I’ve been looking in every wetland area to which I’ve had access. I generally find the hardy and resilient Black-legged Meadow Katydids, as they manage to live in a variety of challenging situations. They can eat the non-native narrow-leaved and hybrid cattails’ seeds and oviposit in the stems. Just recently, I even found some that were singing from phragmites stems at Cleveland Lakefront Nature Preserve. (Phragmites australis is also sometimes called the “common reed.” It’s much higher than I am tall, it has a large plume of a seed head, and it's extremely invasive in wetlands. I'm quite certain that you've seen these.)

Here's a Black-legged Meadow Katydid that was climbing up into the phragmites and another who was singing from one of the thick stems. 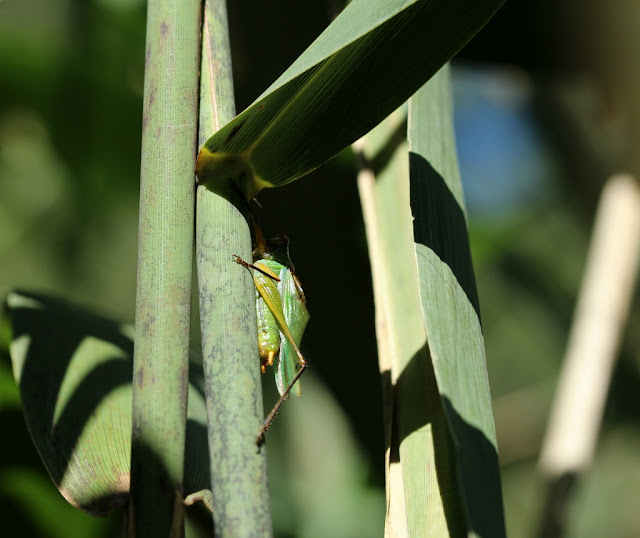 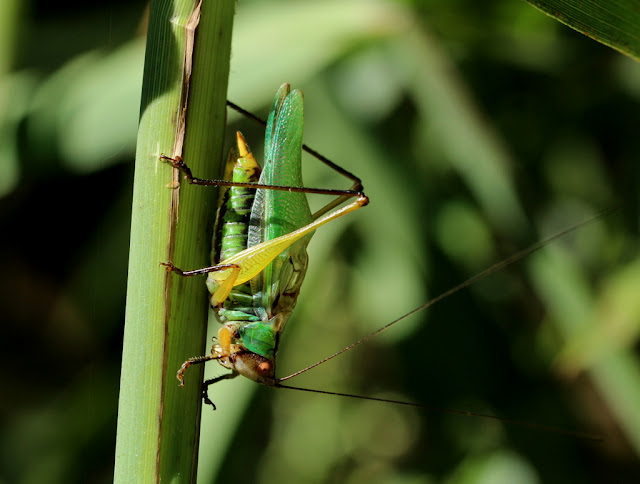 Cleveland Lakefront Nature Preserve originally was a dumping site for sludge dredged out of the Cuyahoga River, but it's now full of life and is an outstanding stopover for migrating birds. It's on the lake shore in the city, though, and I have no idea how Black-legged Meadow Katydids even got to this newly-created land. 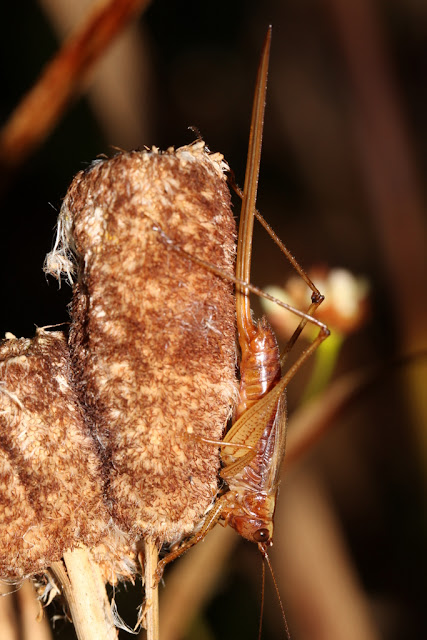 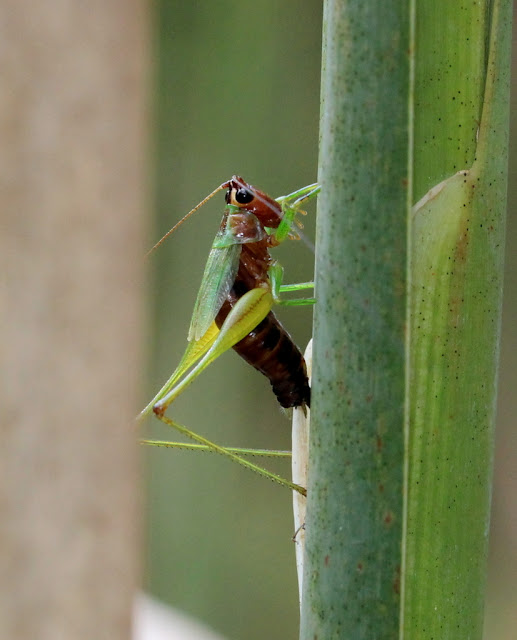 Have they really adapted to non-native cattails this successfully? Could their wetland areas have only recently been taken over by invasives, and are they’re still finding some remaining native plants?

And what about Dusky-faced Meadow Katydids? No sign of them.


There were a few times I thought I’d found them when I looked into the faces of meadow katydids that were tan with reddish-brown markings. A closer examination always revealed that these were our common Short-winged Meadow Katydids, which are a different genus (Conocephalus instead of Orchelimum) and are considerably smaller. A great deal of color variation is possible with these katydids, especially later in the season. 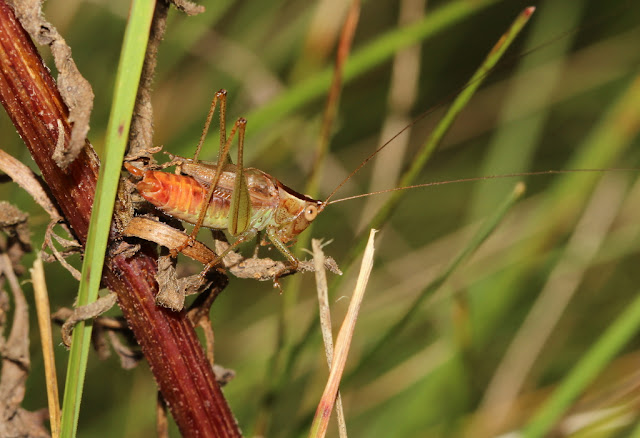 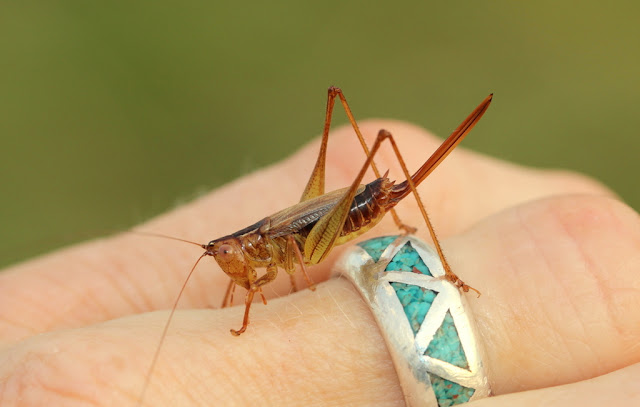 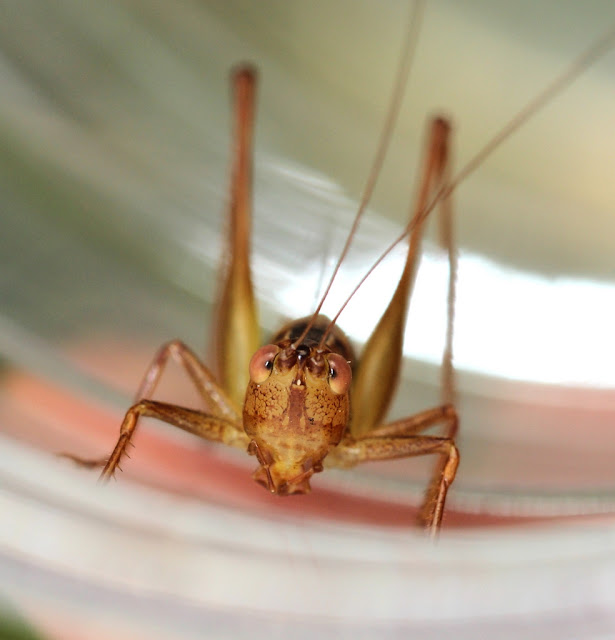 For Dusky-faced Meadow Katydids and some of the other species I haven’t yet seen, I decided that Step One would be familiarizing myself with them in another state so I’d have a better idea of their appearance, habitats, and songs.

Fortunately for me, naturalist Carl Strang has been studying crickets and katydids in the Chicago area for years, and I’ve been following his blog, Nature Inquiries, as he pursues those species that are so difficult to locate. He has a 22-county survey area and his work includes searching for the katydids and crickets that probably haven't been observed and noted recently. And…he invited Wendy and me to come visit him and meet some of those singers!

We’d briefly been to Indiana Dunes and Jasper-Pulaski in NW Indiana before, but had never heard of Kingsbury Fish and Wildlife Area. Carl had a very specific reason for taking us there in the evening.

We pulled off on the side of the road and started searching the edge of the marshes for one of those elusive singers I’d never met, and then Carl directed us to a song that was clearly an Orchelimum. I balanced carefully in the dense vegetation and uneven terrain, tried not to swat continuously at mosquitos, and leaned forward to reach with my microphone while avoiding falling into the marsh….

"There he is,” Carl said softly.

The Dusky-faced Meadow Katydid was right in front of me. 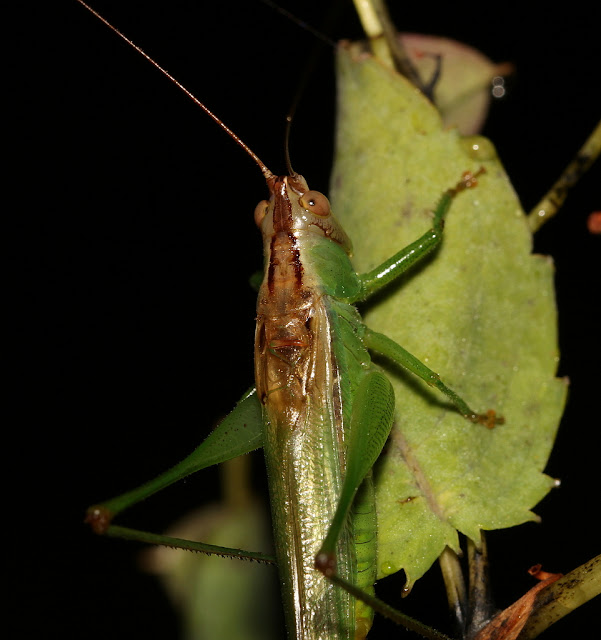 Record, or photograph – and in what order? Get songs, then try for photos!

I did both, and now I finally know what to listen for and what the physical characteristics are.
According to Carl, this male’s face wasn’t as dark as some of them, but the face color can be variable. I could see the color pattern, and this wasn’t the face of the other species I know from this genus. 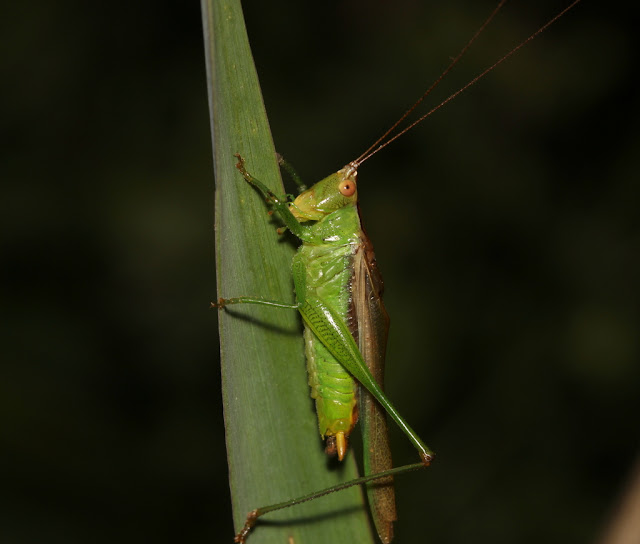 And the legs – they’re quite green! No confusing that with a Black-legged Meadow Katydid. 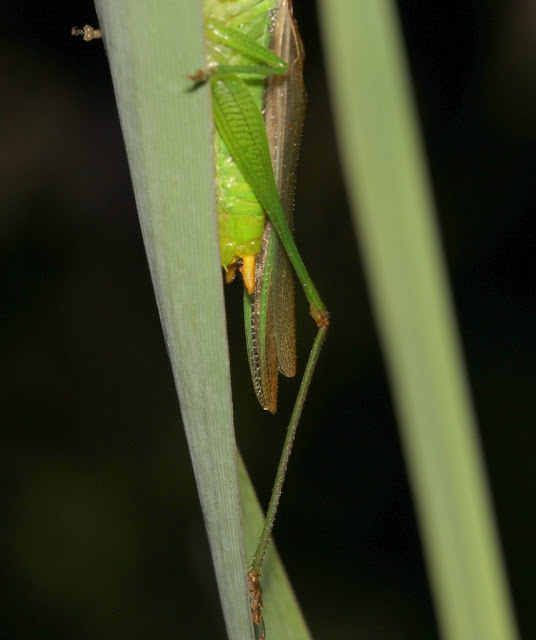 Although I didn’t get every angle, I got at least a few photos of his yellow cerci (small appendages that project from the end of the abdomen). Each species has different shaped cerci and they’re part of the species identification. 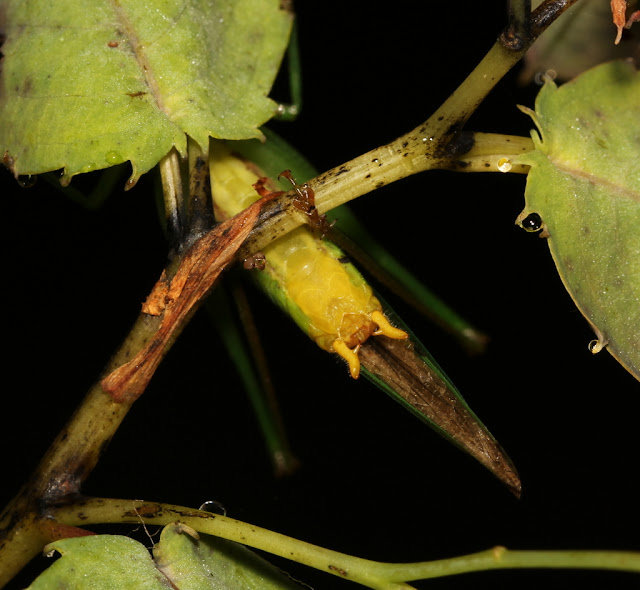 Carl found another individual for me to record, and this one wasn’t singing the song of the first male. Instead, he was doing a very long series of tic-tic-tic calls.

I've since read more about these katydids. Singing Insects of North America directed me to a 1962 paper by Edward Thomas and Richard Alexander that provided some additional information on Dusky-faced Meadow Katydids and two related species also on my search list that are even less common. There, I read the following about those “tics” I'd recorded:

“.. as many as 150 ticks have been counted in succession, produced without buzzes by a lone, undisturbed male.”

That must have been what I was hearing and recording!

The tics are also interesting to see. They sound like single “tics,” but they are actually in pairs. “The ticks of concinnum and campestre are usually single, and when they are double, the sound produced by the opening of the tegmina is much softer than that produced by the closing stroke.” (The tegmina are the thick, upper wings on these and other insects. It’s this set of wings that’s used for sound production. They also cover the inner wings that are used for flight in those insects that fly, which not all katydids do.) If opening the tegmina happens first, that could be why the first half of each pair looks considerably softer in the sonogram.

Here’s one more recording of the first male’s songs interspersed with tics. 16,000 Hz is a very high song, considering the threshold of human hearing (probably for an eight-year old) is 20,000 Hz. The song could be quite loud, but we won’t perceive it that way in the field because it’s so very high.

I'm still excited about seeing and hearing these katydids, and that made me all the more determined to find them in Ohio.

However, it's 45 degrees and raining as I write this on October 3rd. I still haven't found Dusky-faced Meadow Katydids in Ohio yet, but I'm already planning where to search for them next August and September.

Ten months is a long time to wait! 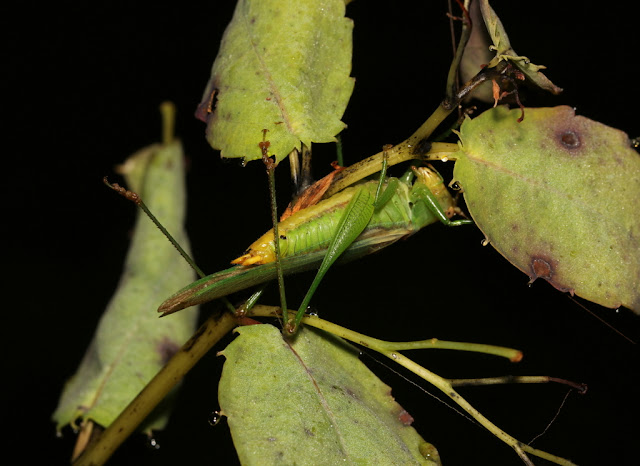