Crickets in the House: ground crickets and field crickets 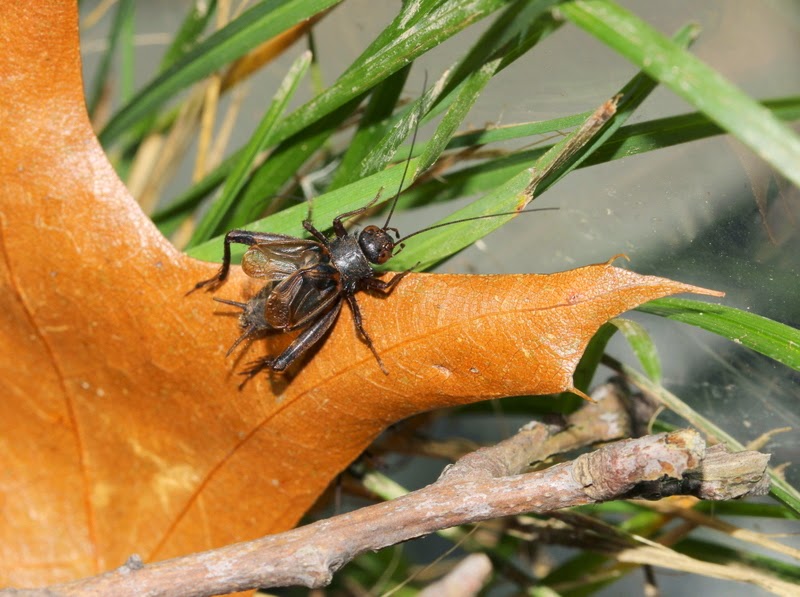 The high temperature in Cleveland yesterday was 30 degrees below normal for this date, and everything’s been snow-covered for days.  Here in the little room I call my studio, however, it sounds like August.

Toward the end of the season – especially as the arctic cold front approached - I brought a variety of crickets into our home to live out their final days in warmth and comfort.  I’ve been rewarded not only with their beautiful songs, but also with a chance to observe their behavior in ways I could never do in the field. (Below: female Striped Ground cricket) 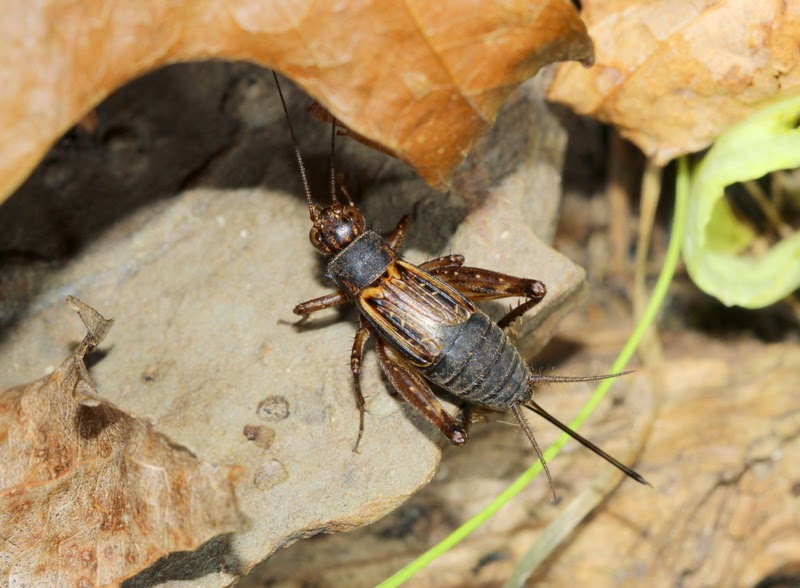 Where are they living?  In terrariums with plants, goldenrod and aster seed heads and timothy stems.  I've added a few fallen leaves, an occasional little rock or a couple of twigs…anything I can think of to make their micro-habitat similar to where they were living before the snow. 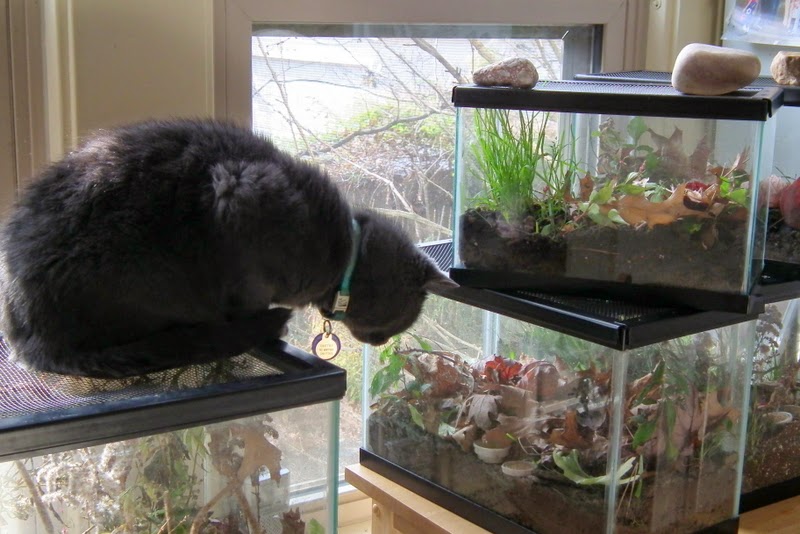 They dine on lettuce and have dry cricket food and water cubes available.  I mist their plants and dry leaves daily so there are always some droplets of water.  When it’s sunny (which is not that common in NE Ohio in November), I put their terrariums in the south-facing kitchen window.  The crickets sit up on the leaves and bask in the sun. (Below: Allard's Ground Cricket.) 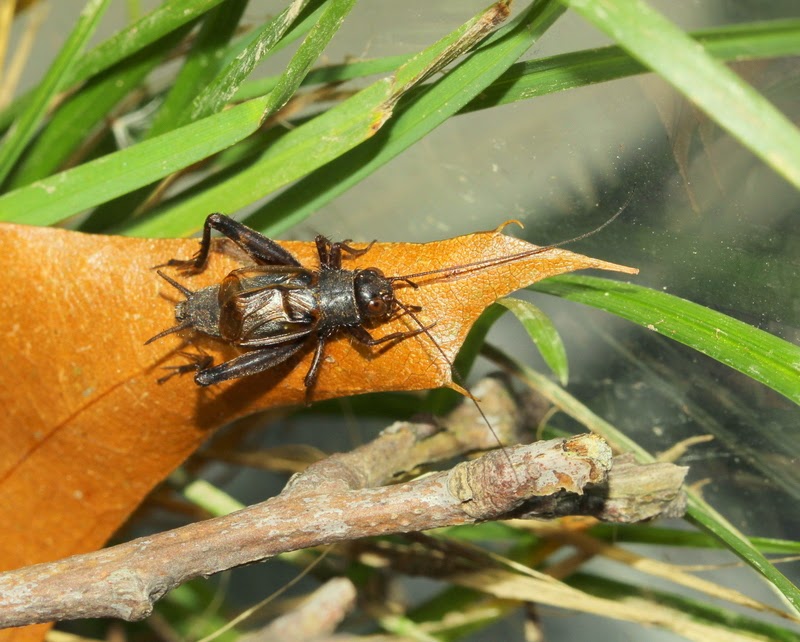 I’ve had a number of inquiries about my indoor ensemble, and I thought you might enjoy reading about them and hearing their actual songs as recorded in the house.  Ready for the tour?

I’ll introduce four ground cricket species and the Fall Field Cricket in this post, then add the Black-horned Tree Crickets and Short-winged Meadow Katydids – and their interesting stories – in the next one.

Ground crickets are small, brown, fast, excellent jumpers, and experts at hiding. In the field, I hear them far more then I see them.  They do well indoors, though, which gives me the opportunity to watch them up close. 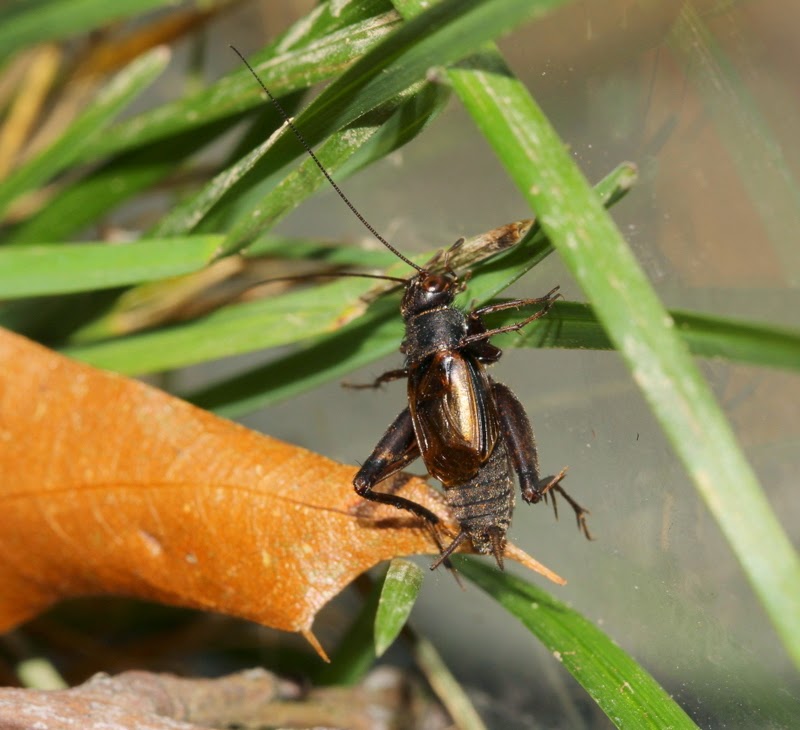 Allard’s Ground Crickets have a fast, sparkling songs.  They sound rather delicate out in a meadow or near the Lake Erie beach areas, but indoors, they actually sound intense, loud, and fierce.  I’m sure that characterization would please them very much!  Listen:

How often do I get to watch ground crickets sing?  Almost never, unless it’s in a terrarium.  Like all of our singing insects, they have beautiful wings.  They don’t raise them as high as the tree crickets, but they’re elevated more than those of the katydids (see below). 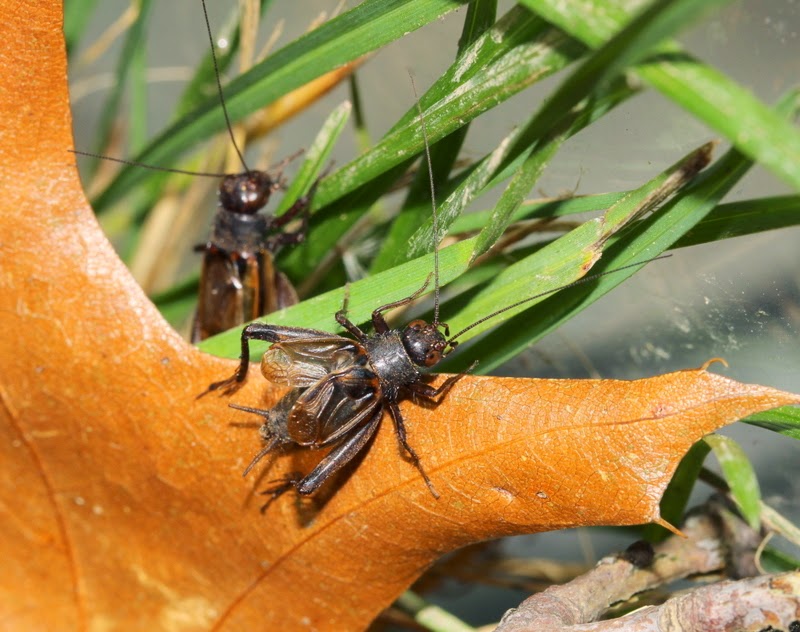 Our next stop will be the terrariums with Striped Ground Crickets.  Their songs are quite different; they're short, little bursts with space between them.


Here’s the oldest cricket in the house – A Striped Ground Cricket that Wendy named Methuselah. 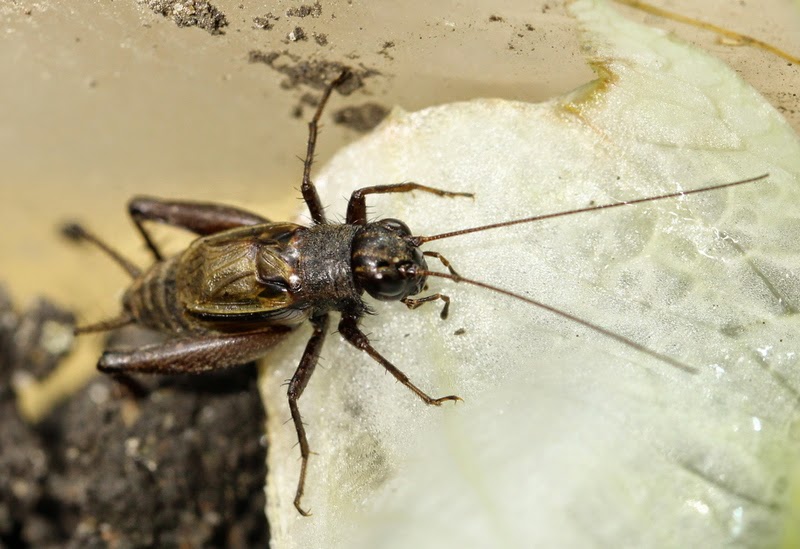 He’s been here for quite a while, and as of 11/19, he was still singing.  As occasionally happens with these old crickets, he lost a back leg rather recently.  His “home” is safe and trauma-free, so it’s not like he was in a fight or had an accident!  Last year, we had a Striped Ground Cricket who eventually lost both of his back legs.  He still managed to prop himself up with his front two pairs of legs and sing.

Ground crickets do change their songs when they interact with other males or when a female is present.  The next recording shows some of the possible variations in Striped Ground Cricket song.  This particular terrarium has a small group of males and females of both species - the ones I scooped up right ahead of the cold front that would have been lethal for them


My favorite singers are the Cuban Ground Crickets.  These tiny crickets are only ¼” in size, but they are astonishingly good jumpers.  Their songs are a silvery pitch that increases in intensity and lasts for several seconds.  It ends abruptly – a sharp cutoff, as we might say in musical language – and begins again after a pause.

Although the Singing Insects of North America range map will not show them as being present in Ohio, they actually are widespread in NE Ohio.  I'll write more about them in the future, as it was quite a surprise to find them here! 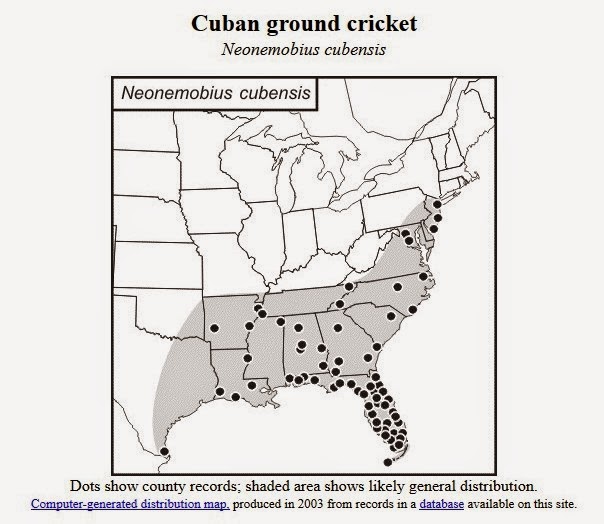 Here’s a photo – at least as best as I can get of one of these tiny individuals. 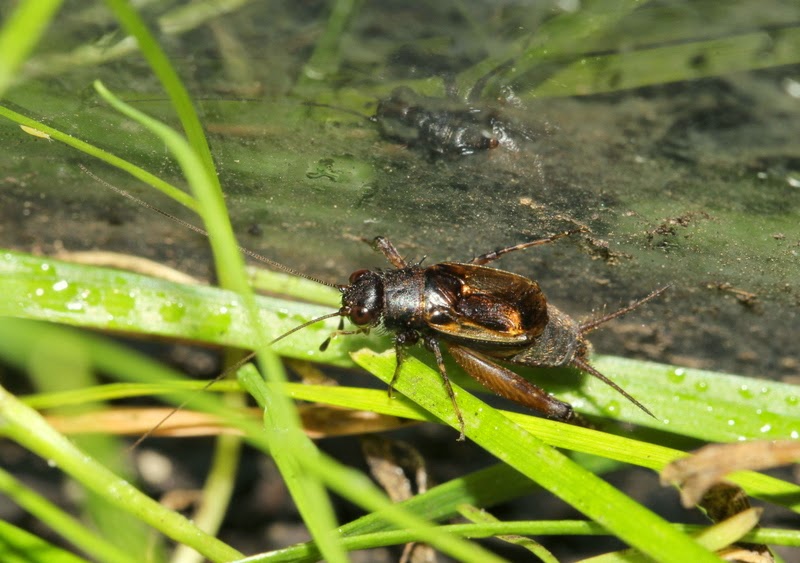 Finally, we have Spotted Ground Crickets this year.  This species lives in dry, open woods in sandy soil, and can be found along the Lake Erie shoreline almost to the Pennsylvania border. They are not common in general, but they can be rather plentiful in some areas. 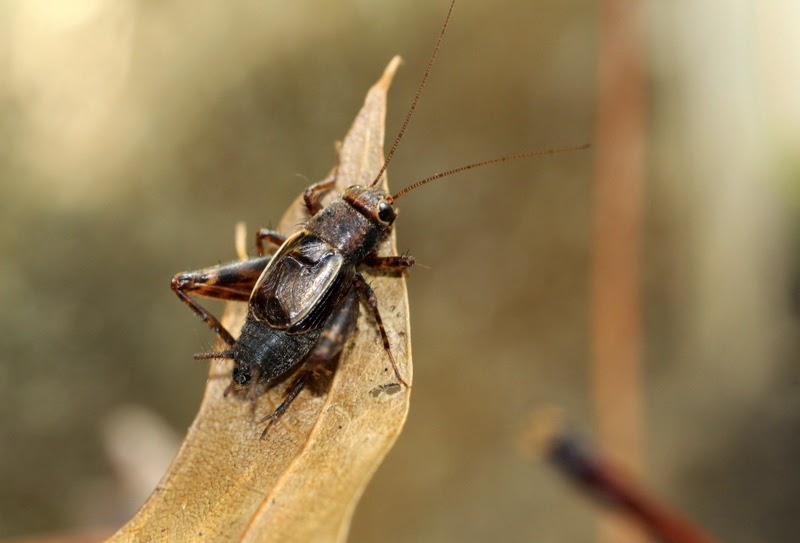 This was the first year I’ve had an opportunity to study them, and they are charming.  I created a terrarium with plenty of fallen oak leaves, as underneath fallen leaves is exactly where they like to stay. 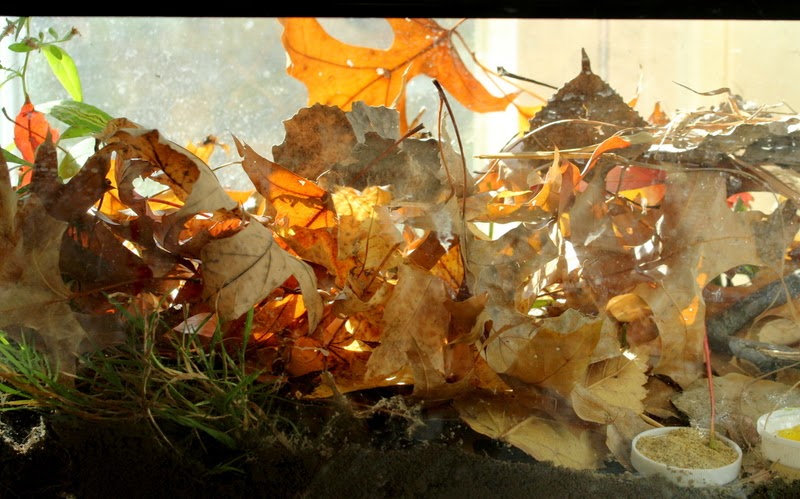 On a sunny afternoon, though, they sit right on top of the leaves. 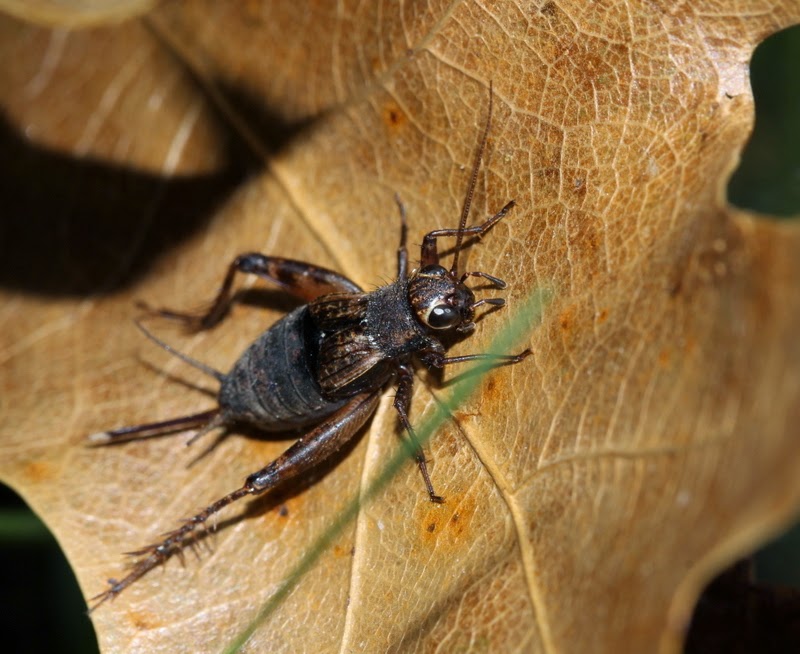 The last cricket for this post is the Fall Field Cricket.  Compared with the ground crickets, they are huge.  They’re very dark and have large, round heads – quite a different appearance from the ground crickets.  They live in meadows, fields, along the Lake Erie beaches, and in the city. 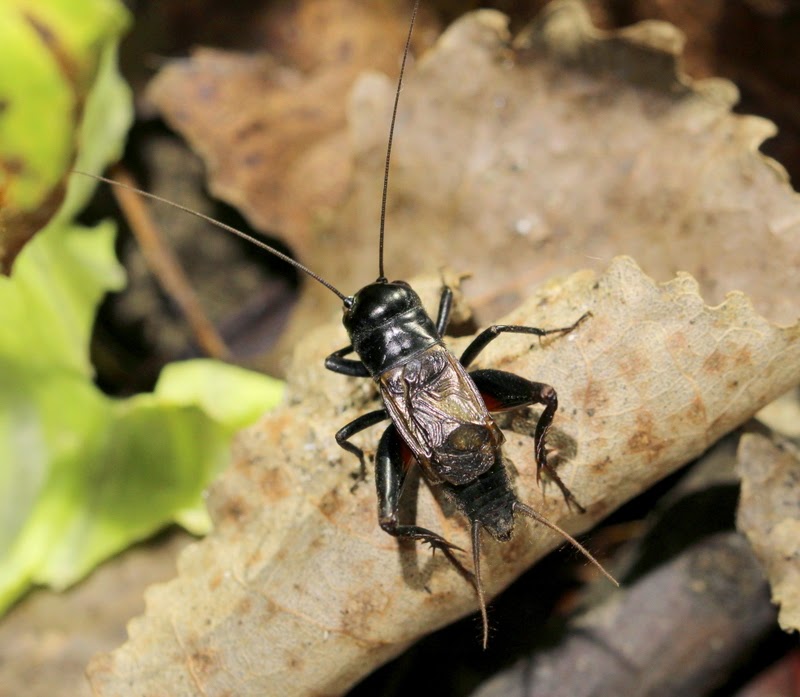 Their numbers dwindle sooner than the ground crickets, and most are gone by early or mid October.  Ours lived until last week – mid-November must have been pretty old for a Fall Field Cricket!  His loud, cheerful-sound chirping was quite a contrast to the lighter, higher songs of the ground crickets.  I was certainly sad when his time was up.

When you listened to his song just now, did you notice a low rumbling in the background?  No, it wasn’t traffic, a jet, or a helicopter.  It was very late at night, and I was still up enjoying the peace, quiet, and crickets.

I wasn’t the only one enjoying all of the above.  One of our two cats, Dmitri, absolutely loves the terrariums and was purring himself to sleep on top of one.

I didn’t disturb his contented nap, but here he is during the day with “his” crickets. 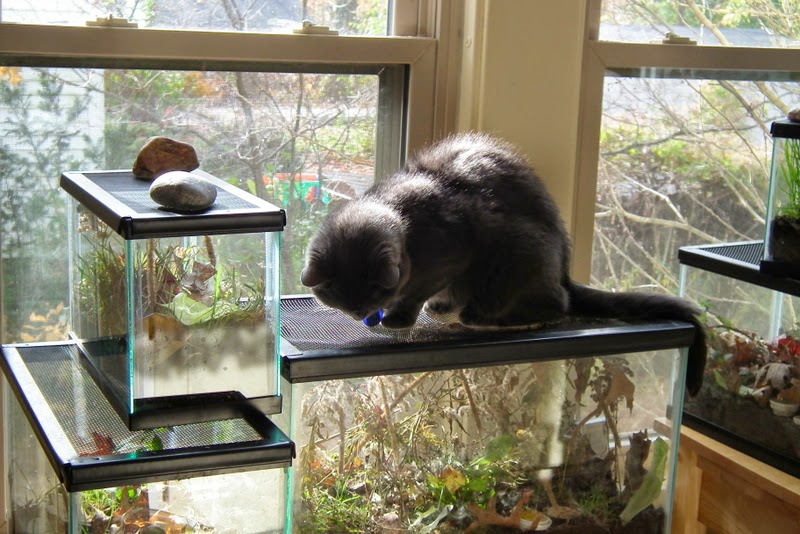 In my next post, I’ll have some interesting stories for you about Short-winged Meadow Katydids, Black-horned Tree Crickets, and what I’ve learned from all of these insects in the past several weeks. 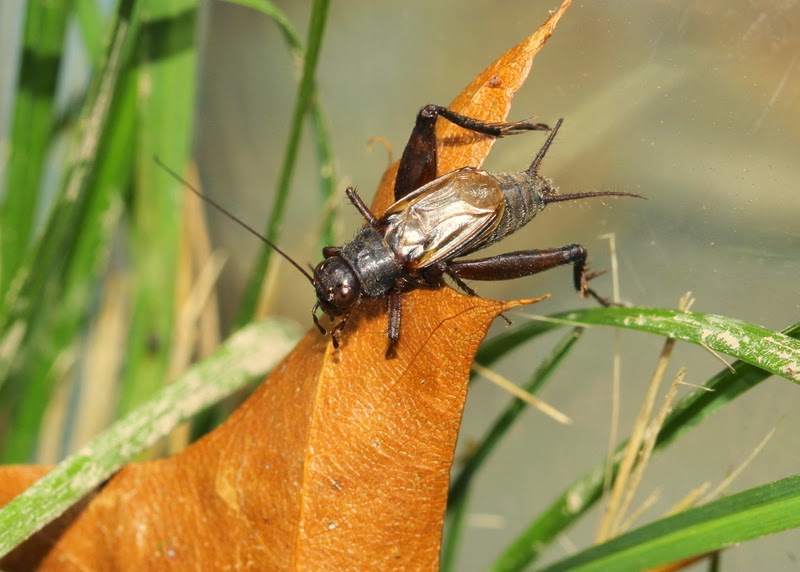 Posted by Lisa Rainsong at 6:44 PM