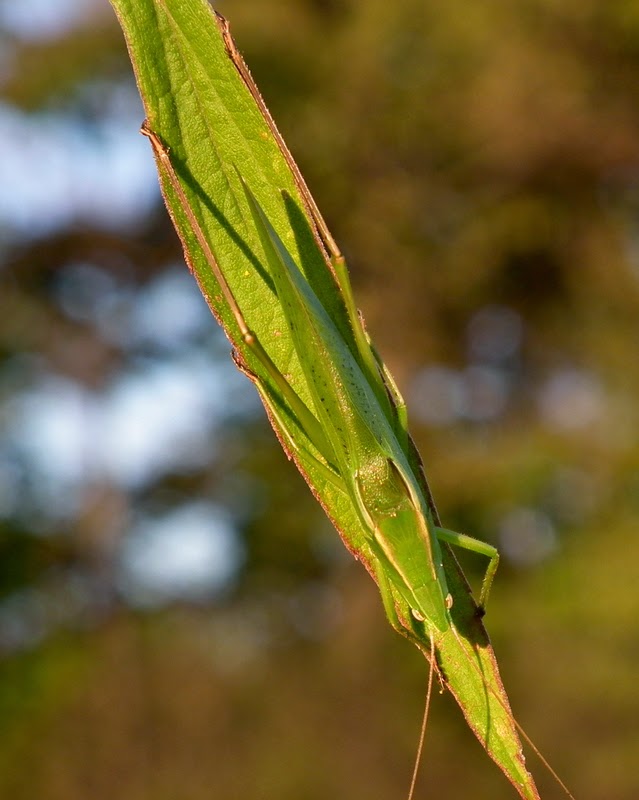 Round-tipped Coneheads.  What an amusing name for a beautiful – and feisty – katydid.  I wrote about them here last fall, and this post will include my 2014 update on where I’ve found them.  It now appears that these southern Ohio singers really are a possibility anywhere in NE Ohio all the way up to Lake Erie.


I’d been keeping an ear out for them whenever I was in habitat that might be suitable, but certainly was surprised to hear that thin, penetrating buzz coming from a meadow at the Cleveland Museum of Natural History’s North Kingsville Sand Barrens.  This preserve is practically at the lake shore in the far northeast corner of Ashtabula County!


But I know that sound – it’s unmistakable.


Being so far northeast, I felt I had to get some documentation of this individual.  I crept forward with my microphone pointed in the direction of the song. Too far, still too far, a little closer, almost close enough for a reasonable recording…


…and he stopped singing.  That was it.  He was not going to sing again.  I waited.  And waited.  I circled through the entire meadow listening for other individuals.  Nothing.  I went back to the spot where I’d heard him.  It wasn’t going to happen.  I waited for an hour as temperatures dropped and the sun set.  He outlasted me.


I just couldn’t dismiss this.  I had to get something to show that this species was really there!  If you’ve been reading this blog for a while, you know by now that I simply had to go back.


This time, my luck improved.  Two males were singing, and perhaps each inspired the other to be a little less reticent.  I was able to get recordings, but it would be even better if I could get pictures to go with them.  I focused on the slightly more accessible of the two.

Round-tipped Coneheads can be green or brown – I’ve found both color forms to be common here.  I suspected the one I was pursuing was the brown form, as he was so impossible to see him in the dry grasses and curled, brown goldenrod leaves.


Suddenly – there he was!  I couldn’t believe it!  Could I get closer if I crawled toward him, even though my hair would become a goldenrod seed bank and my field clothes would be forever covered with tick trefoil sticktights? 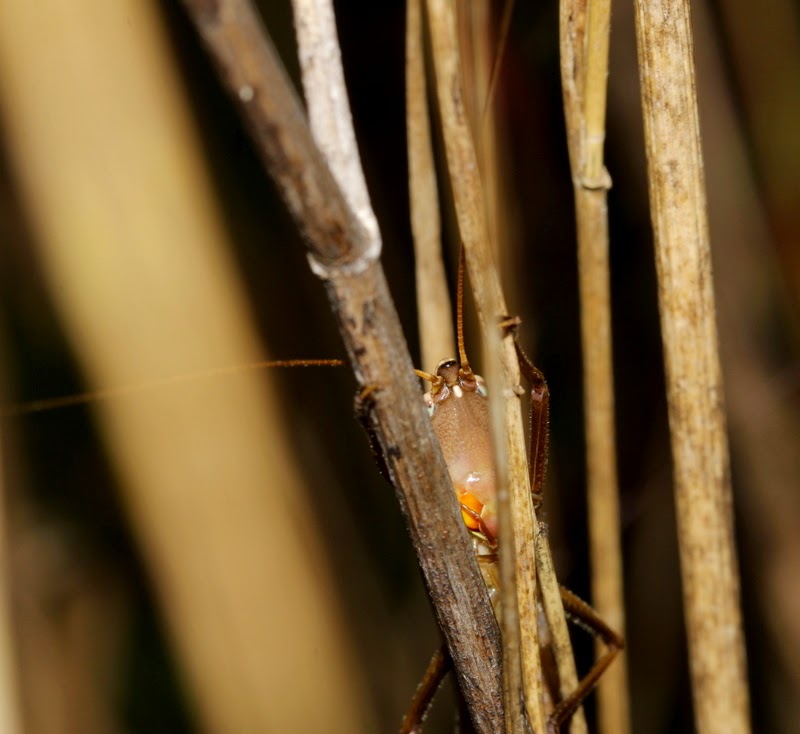 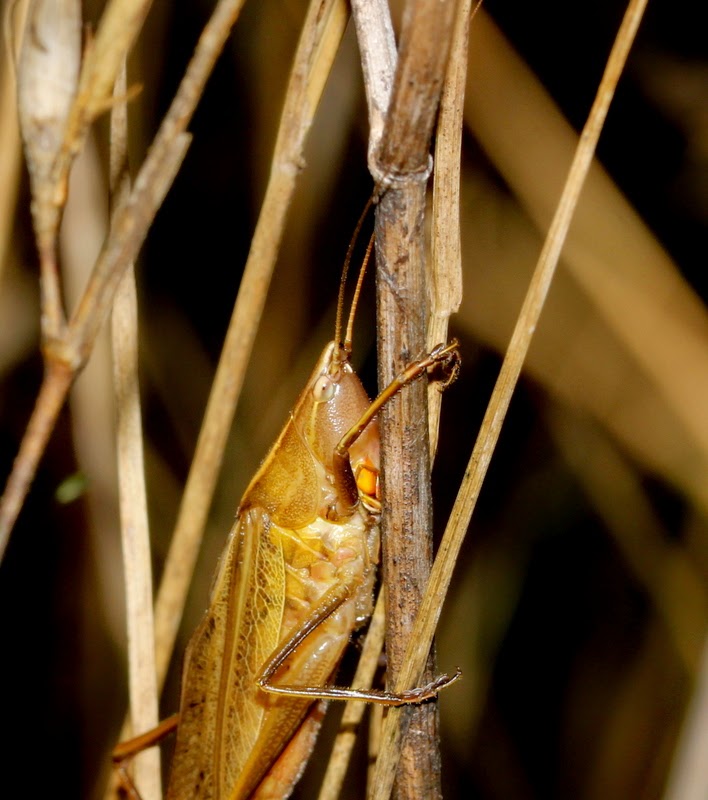 The Round-tipped Conehead you listened to ealier in this post was this North Kingsville Sand Barrens individual.

I’d now found this species in Summit, Cuyahoga, Lake, Geauga, Portage (added this year) and Ashtabula Counties!  I started a NE Ohio range map to keep track of all the locations where I’d heard  them.   But since I didn’t yet know if they were west of Cleveland my next stop would be Lorain County.


They didn’t seem to be singing in the parks I checked, but I had one last stop I wanted to make.  I was certain they’d have to be present in the large meadow at the front of Lorain County Metroparks’ Sandy Ridge Reservation in North Ridgeville.  It’s easily accessed from the park entrance, so I walked and walked through the entire area listening for them.

No luck.  It was almost sunset, and the park would be closing.  Maybe there really weren’t any Round-tipped Coneheads in Lorain County after all.

When I left the park and turned on to nearby Case Road, a familiar buzzing sound penetrated right into my car.


Just how close was this conehead to the road?  And where in the world could I pull over and get out?


Here was a new set of problems: a conehead singing at a  large, expensive private residence.  Amazingly, this one was actually singing from the grass near the road.  I pulled over as much as I could in order to get a recording, and it seemed that I should really be able to find this individual for photographs.

Of course, he stopped singing and I could not wait to see if he’d resume. The road was too narrow, my car looked like I was a motorist in trouble, and this was someone’s property.  It was not a plan.


But I thought I’d heard more than one, and I subsequently realized that a second individual was singing in a soybean field almost directly across the road.  However, the soybeans were right next to another very large, expensive house and property, and the residents appeared to be outside.

Another field close to these two residences also had a singing Round-tipped Conehead, but it wasn’t safely accessible.  Recordings would have to suffice, especially after a concerned farmer driving past in his pickup stopped to see if I was OK.  “I imagine you have help on the way?”  Time to move along…


So just how widespread are Round-tipped Coneheads?  I know they’re new arrivals to the snow belt counties of Lake and Geauga, as I have only started hearing them in the past 5 years.  Here's the current range map from Singing Insects of North America... 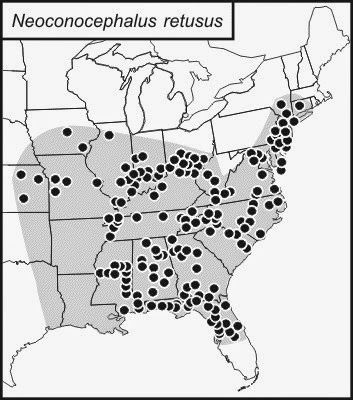 ...and here's the map I've complied with ongoing entries from Linda Gilbert as well.  The link to the map is below the photo if you'd like to see the locations of all the points we've added. 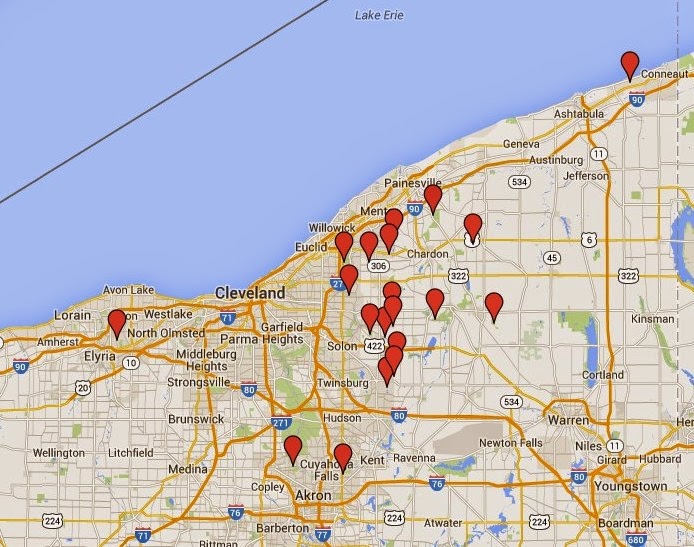 
Each year, I find them a little farther north and east. How long have they been in Lorain County west of Cleveland and Summit County south of Cleveland?  I guess I’ll never know that part of the story – only that they’re established in both counties now. 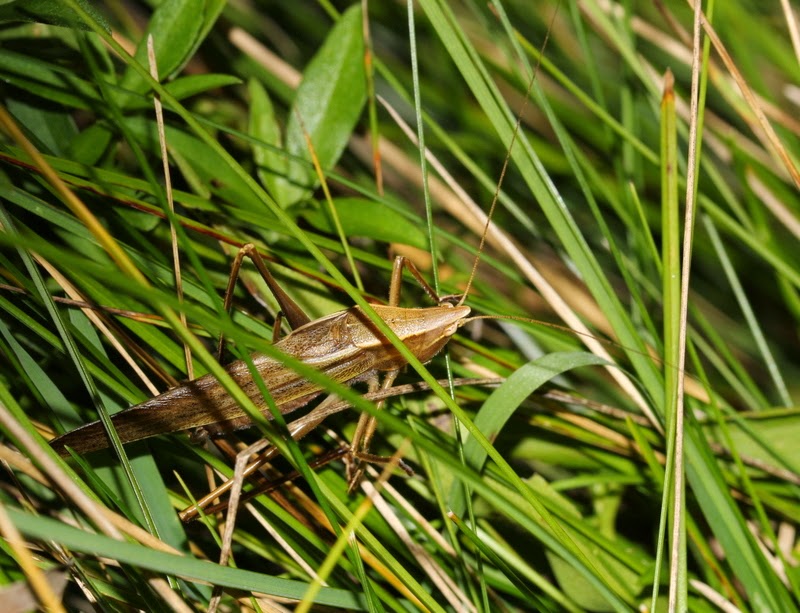 NE Ohio’s very common Sword-bearing Coneheads and recently-added Round-tipped Coneheads aren’t the only coneheads here, as I am learning.

Nebraska Coneheads are common west of Cleveland. They are so common on Kelleys Island in Lake Erie that I don’t know how anyone can sleep with their windows open.  The first Nebraska Conehead I ever heard was in eastern Lorain County, but I hadn’t heard them in Cuyahoga County or east.


We’re finding a few of them east of Cleveland.  I said “we,”, as I am including my longtime friend and Collaborator in Conehead Research, Geauga Park district Naturalist Linda Gilbert. 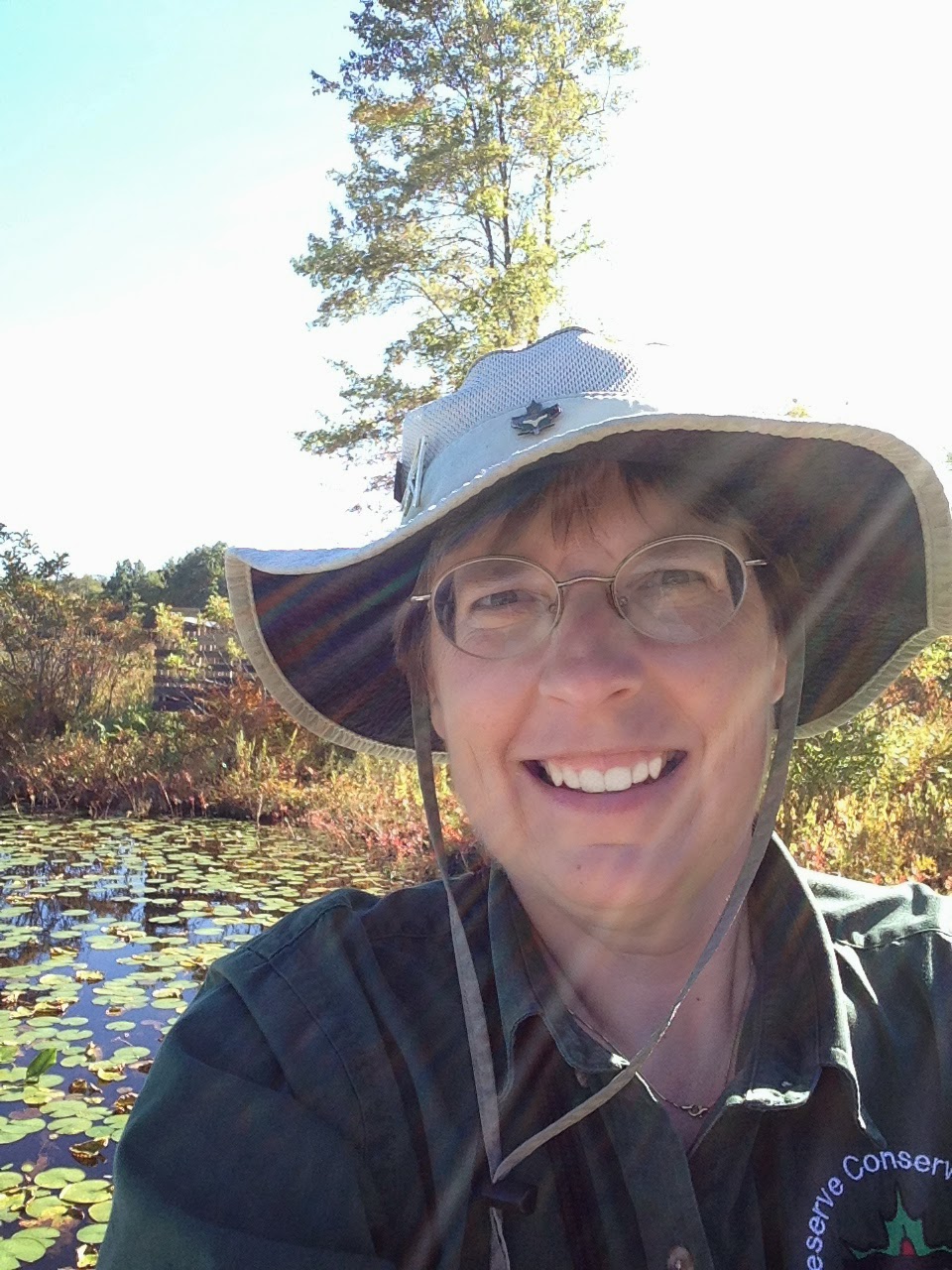 Between us, we’ve documented some Nebraskas in Geauga County and I have one from Summit County.  The one below was singing in the power line corridor at Frohring Meadows, Geauga Park District, in Bainbridge Township.  He was in buckthorns and, of course, dropped into the vegetation when I approached to try to get a photo.


It will be interesting to see/hear if they are moving east or if they remain isolated individuals that turn up every once in a while.

There are a few other conehead pioneers from southern Ohio making their way up here, too.   I found a Slightly-musical Conehead at Burton Wetland State Nature Preserve on 7-30-11 when I was doing a cricket/katydid survey for the Geauga Park District, which manages the preserve.  I recognized the song because I’d heard in at the Midwest Native Plant Conference in Dayton (photo below) – and on the Songs of Insects CD that lives in my car.


I was astonished!  I was only able to get a somewhat diagnostic photo before he dropped into the vegetation and disappeared, but his cone was incredibly long.   I went back the next night with Linda, and other times after that.  I never heard him again.  Someone probably ate him.   I haven’t heard one anywhere up here since. 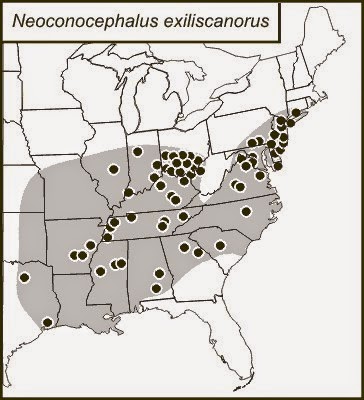 My final Conehead story is a new discovery this year, and the credit goes to Linda Gilbert.  A very loud conehead – possibly more than one – was singing at the edge of a cornfield in Geauga County not far from her home.   She thought it had to be a Robust Conehead, which neither of us had ever heard before.  It was so…LOUD!


I joined her the first evening I could do so.  There we were, on another rural road with ditches on either side but enough traffic to make walking on the road feel unsafe.  Oh, and I did I mention that it was dark and fog was forming?   We walked up and down both sides of the road but the mystery conehead was not singing.

We drove around some other nearby fields, listening for very loud coneheads to no avail. When we returned to our first location later, our target individual had begun to sing quite assertively right next to the cornfield fence!  It seemed possible that we just might be able to get close to him as long as he’d keep singing and not dive down into the vegetation, never to reappear.

You can see the outcome of our (mostly) patient search right here in Linda’s photos. 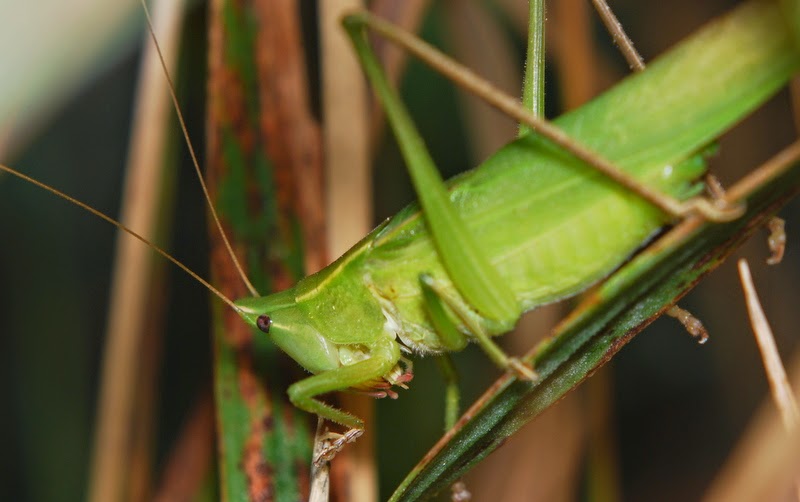 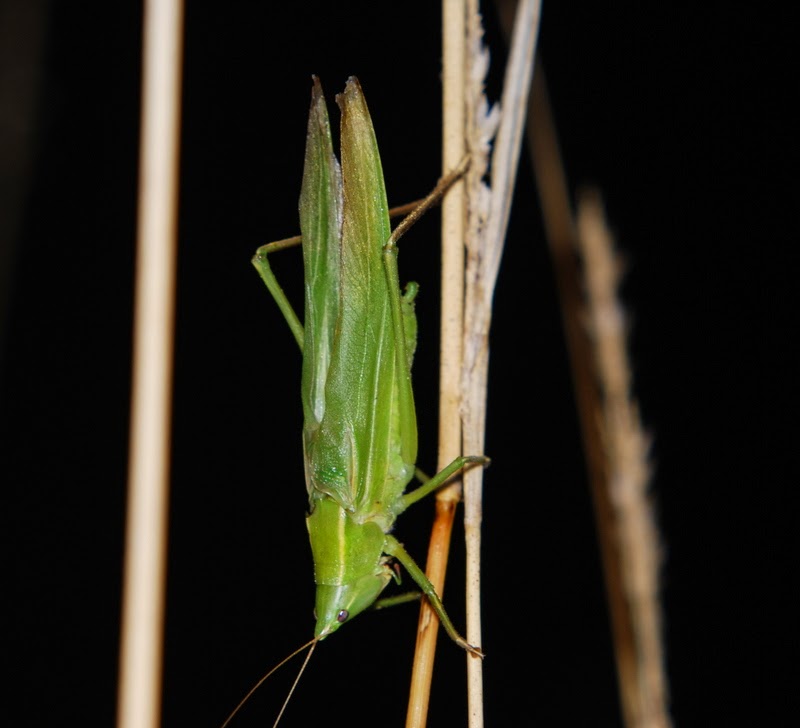 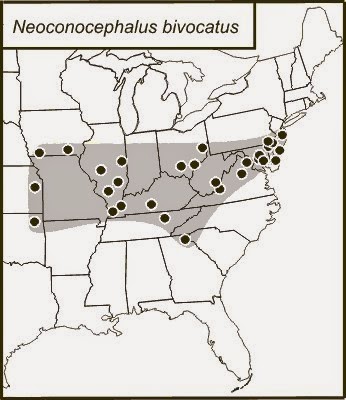 But it was already September.  Summer and fall of 2014 were not been very kind to crickets and katydids; the cool, rainy weather resulted in insects maturing much later than usual with no extension of their season in the later autumn.  We had hoped to relocate him - or find other members of his species - before fall was over, but we did not.

It’s mid-November now and it may as well be winter.  Cleveland is experiencing day after day of temperatures 15-20 degrees below normal and the inevitable lake effect snow that Lake Erie (and Lake Huron) are sending to NE Ohio.  I’m consoling myself with meadow memories and looking forward to next summer, when I hear my first coneheads singing in the grasses. 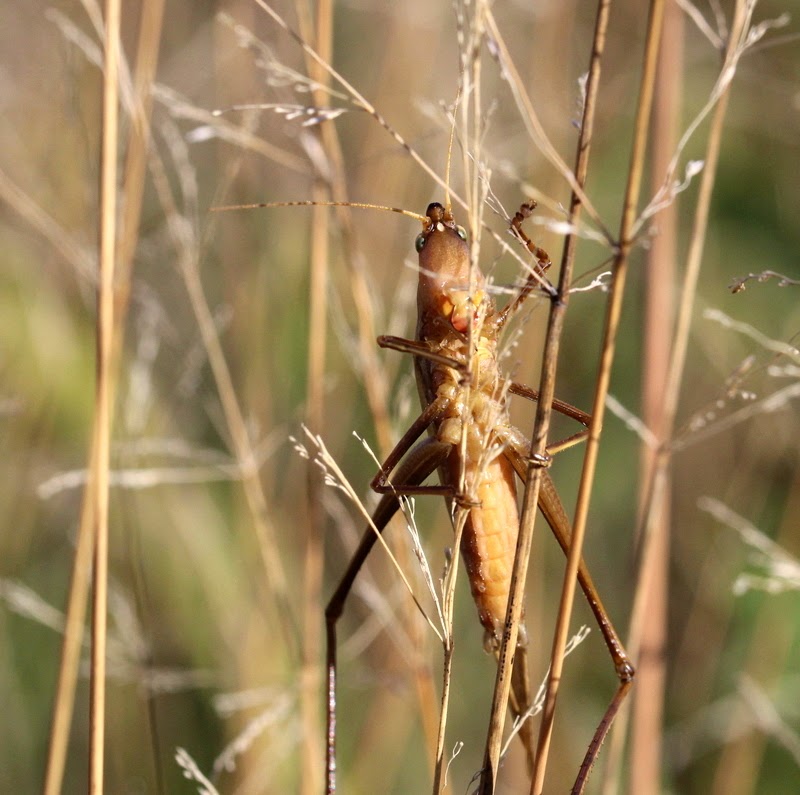 Posted by Lisa Rainsong at 6:09 PM