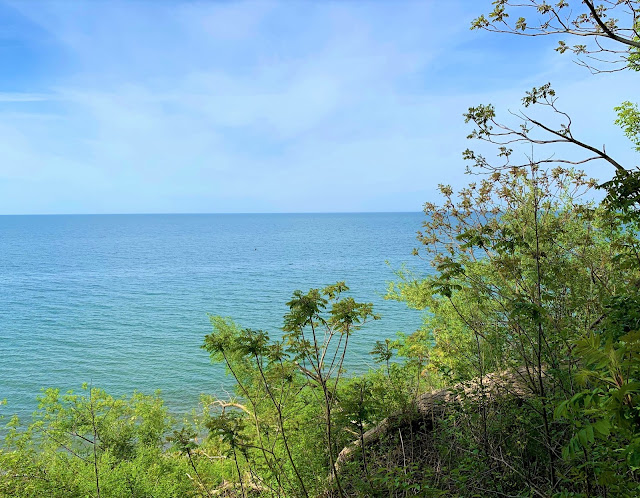 I love March and April, as you probably know by now, but sometimes I wish May could slow down just a bit. I’d like a little more time to appreciate all the birds that are leaving, those that are passing through, and those that are arriving to spend the summer here.

Mid-spring brings travelers that use our welcoming backyard as a rest stop on their journey north. I’ve been keeping records since 1994, and I know who to expect and when they’re likely to pass through. There’s something reassuring about looking in my backyard record book and knowing almost to the day when various birds are likely to arrive.

There will be Yellow-rumped Warblers up in our large, old pin oak. Nashville Warblers will be in the birdbaths followed by Tennessee Warblers, and Swainson’s Thrushes will stop for a week or so in mid-May. Most years will also bring an Ovenbird, Hermit Thrush, or Wood Thrush foraging for insects in the oak leaves  from last year, and numerous warblers will search for insects high up in the oak flowers. 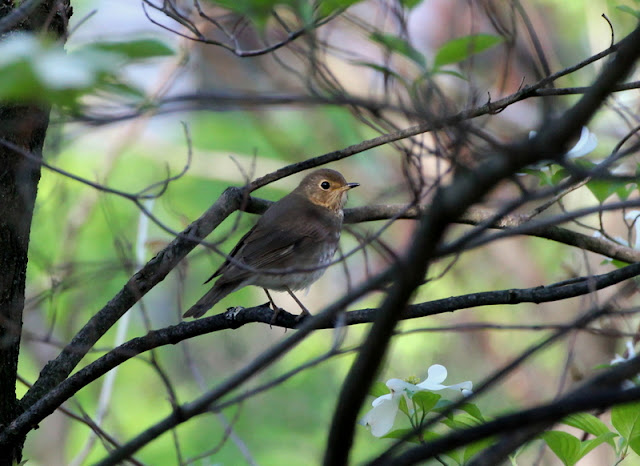 Swainson's Thrush across the driveway from our dining room window

Listening for the return of birds who nest in northeast Ohio each summer is a joyful homecoming from this human’s point of view. I call it coming “home,” because it’s where they nest and their nestlings will grow, fledge, and hopefully survive migration and their winter residences to return again next spring.

This year, I decided to make multiple visits to one of my favorite places so I could listen to the sounds of spring migration in the second half of May.

When I finished all my academic work for the semester and my students were going home, I made five trips to Lake Erie Bluffs between May 19th and 27th. Birds moving north will stop and rest in the woods and meadows overlooking Lake Erie until a south wind helps them travel across to Canada. I wanted to listen more than do a visual search. Considering how early the trees and understory leafed out during the periods of hot weather ahead of the birds’ arrival, listening was an appropriate choice.

The avian choruses changed considerably in just four days and quite significantly during the entire week I made recordings of the birds I heard and where and with who they were singing. 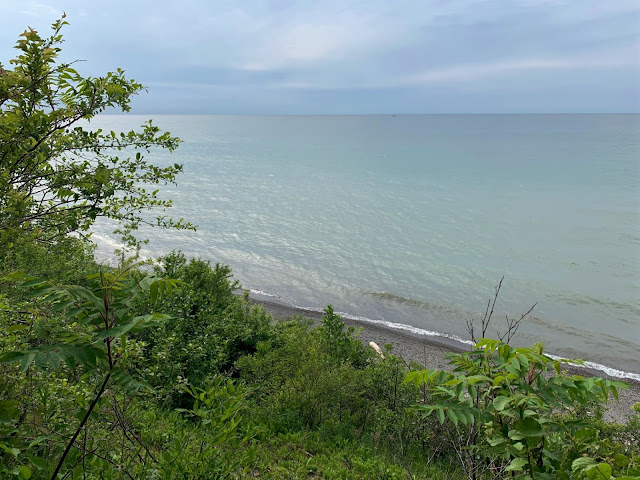 As you listen, keep in mind that I was up on the bluffs that overlook Lake Erie. Sometimes, you’ll actually hear the waves that I could see from where I was standing. You may also hear the breeze from the lake in the broad leaves of cottonwoods in some places and the European black alders in others. And of course, there are humans with their loud boats and motorcycles (which annoy me greatly), and there are always trains (which don’t annoy me at all).

What I heard was a complex mixture of avian travelers and birds returning to their breeding territories. I typically emphasize “listening by habitat’ in my birdsong classes, but that doesn’t quite work in May – especially on the lakeshore.

For examples, Yellow Warblers are ubiquitous at Lake Erie Bluffs. There are more of these feisty yellow beauties in the shrubby, old-growth fields that anywhere else I go. Each of them has multiple song options and can quickly switch between them, making aural identification tricky until one learns their repertoire. 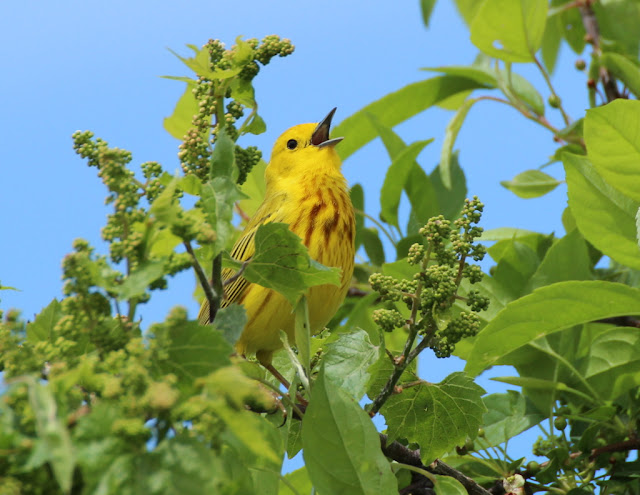 Visual identification was not helpful, as these small singers were seldom apparent in the leaves and branches. 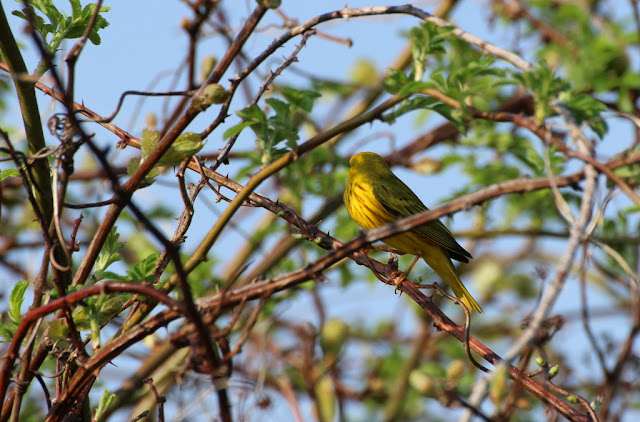 All I could do was study my sonograms after the fact and make my best guess. I was able to confirm one American Redstart among them.

(This is as American Redstart I recorded at Lake Erie Bluffs five years ago singing exactly the song I heard this year. I've included this recording so you can hear what enabled me to confirm the Redstart mixed in with this year's Yellow Warblers. The Redstart sonograms also looked the same both years. )

Were there other warblers? Yes, but I couldn’t always separate them out of the overall texture because there were so many birds singing simultaneously!

It was easier to distinguish the birds with the slightly lower pitches and distinctive phrase patterns of the more recognizable songs. Robins were present– they’re in every habitat. Eastern Pewee? Yes – he’d just come back, as had the Red-eyed Vireo and Great Crested Flycatcher.

Northern Cardinals and the Tufted Titmice with their multiple song types had been there all along. Carolina Wren and House Wren? I typically hear them in the edges, but they both were in the woods along with the Gray Catbirds I typically hear in more open, shrubby habitat. There was even an Eastern Towhee singing back there!

I think you’ll have a good chance at picking out the individual species in this recording. 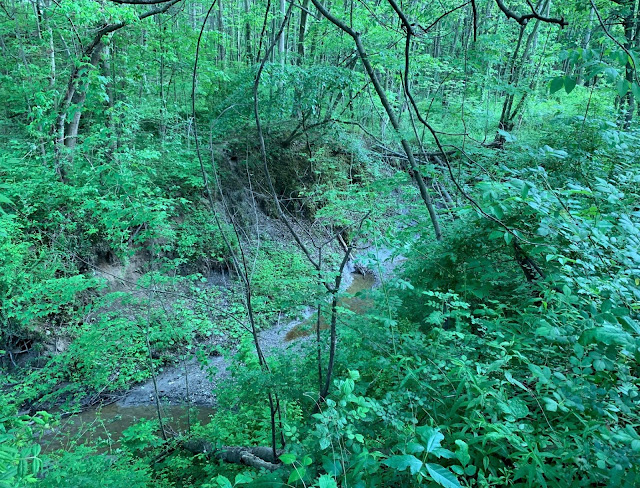 But combining all these recent arrivals with the birds who are just passing through results in a lot of birds singing in an orchestral tutti. They were not taking solos.

I might make this exercise an annual ear training practice assignment for myself.

Another large chorus was performing in the open areas on the Lane Road side of the park, and that’s where I focused my attention next. 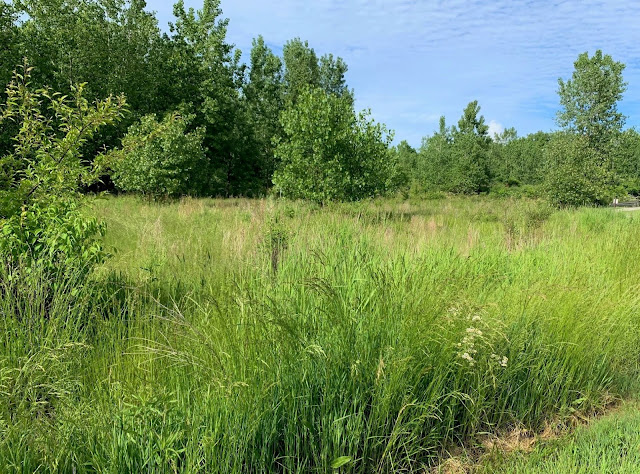 The number of warblers in the woods at the far western end of the park had diminished; and the Wood Thrush and Veery that joined them might actually stay for the summer. However, the primary ensemble was comprised of recently-returned summer residents in the open areas. These singers all belonged together in this habitat.

Near the shelter and the stairway down to the lake was a stand a trees and shrubs occupied by a Baltimore Oriole and also a Tufted Titmouse that was probably attracted to the nearby bird feeders. Every Baltimore Oriole has his own collection of unique melodic fragments, and male Tufted Titmice each have a repertoire of short, loud, repetitious songs. At first, I wasn’t sure which species I was hearing at times, though I was leaning toward titmouse. Ultimately, I realized it was actually both!

Also singing on this side of Lake Erie Bluffs were Orchard Orioles, Warbling Vireos, Willow Flycatchers, Common Yellowthroats, American Goldfinches and an Indigo Bunting. A Yellow-breasted Chat was an occasional comic soloist.

Here are two Common Yellowthroats whose personal shrubs are a little too close to each other. 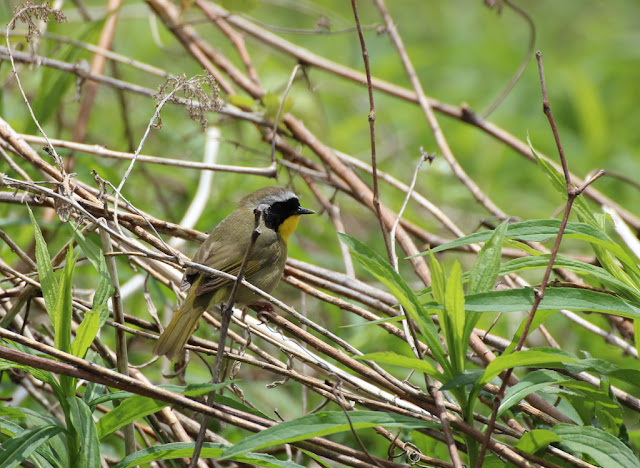 Just the above-mentioned species together would be an impressive concert, but none of these comprised the largest sections of the ensemble.

Those were the Catbirds and Yellow Warblers: the signature sound of Lake Erie Bluffs. 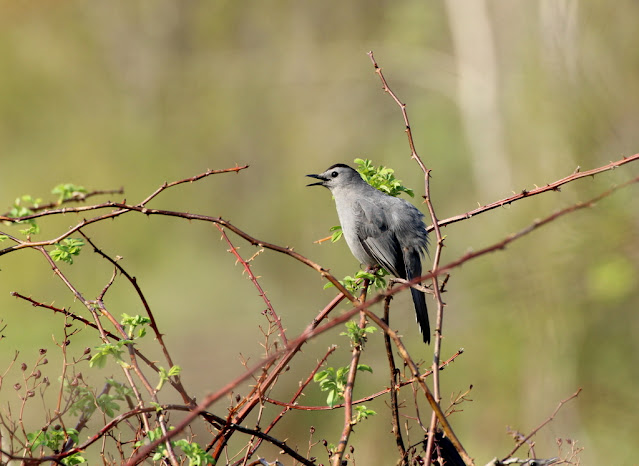 The Brown Thrashers that arrived in April had already begun to quiet down – listen and watch for them in mid to late April if you’d like to hear their impressive, imitative serenades. Their role had now been taken over by the many Gray Catbirds that seemed to be singing from every large clump of grapevine-covered shrubs or venerable blackberry tangle. 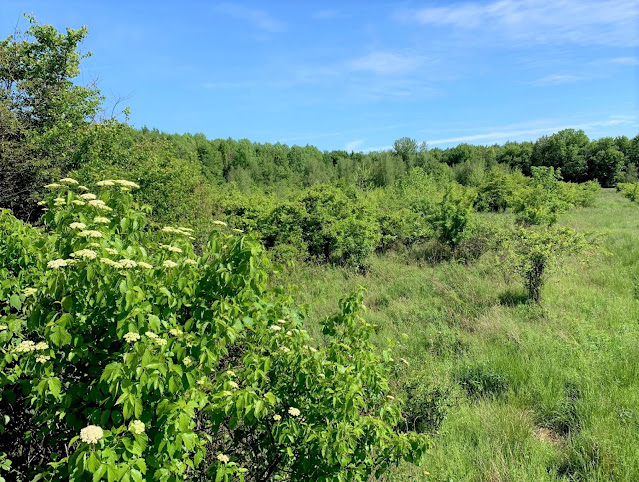 The Catbird in my recording was singing next to this small observation desk.
Lisa Rainsong · Catbird Next To Observation Deck LEB 5 - 25 - 21

There are more Yellow Warblers here than seems possible; one would think that at least some must be migrants. I’m amazed each year by how many nest here and have often had the delightful experience of being literally surrounded by them. 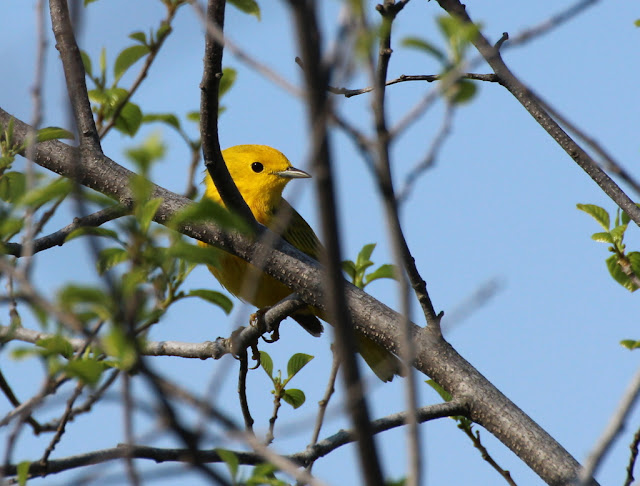 I’ll close with one last story about the wooded ravine along the trail connecting the west side (Lane Road) with the east side (Clark Road) of the park. I went back on May 27th, certain that by now that all those woodland Yellow Warblers would have crossed Lake Erie and the Catbirds would have relocated to more shrubby areas beyond the woods.

They were still there. And the one American Redstart I worked so hard to confirm?

Two male Redstarts flew right past my head with a female watching from behind me. 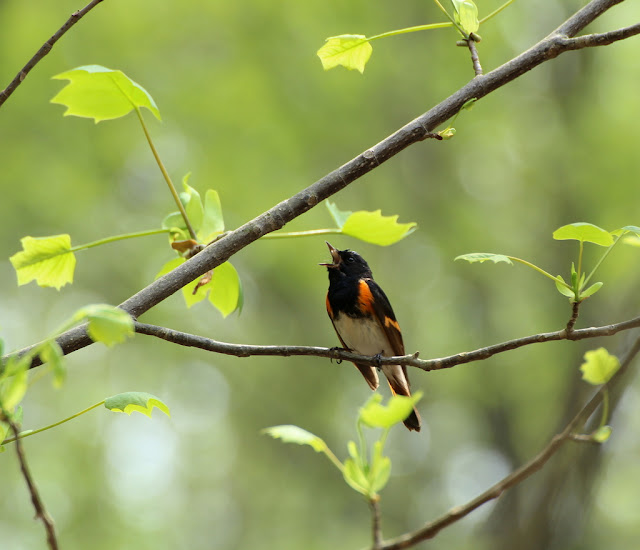 My car was parked in the circle at the end of Lane Road, where two of my favorite singers were performing. Before I put away my recording equipment, I recorded the Orchard Oriole immediately followed by the Warbling Vireo (pictured below). 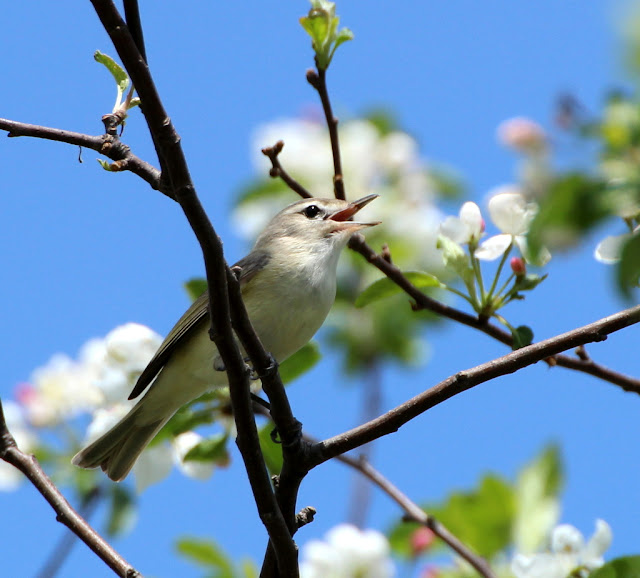 And as I walked and listened on those trails that week, I realized the birds weren’t the only ones coming home.

For a comparison of Yellow Warbler and American Redstart songs, see my May 2016 post  http://listeninginnature.blogspot.com/search/label/American%20Redstart

Lake Erie Bluffs is one of the Lake County Metroparks in NE Ohio about 35 miles northeast of Cleveland.

Here’s a map of the two sides of the park and the trail that connects them.

There is also beach access to the fascinating beach below where you can look up and observe the progression of the bluffs as they slide down to the lake. If you also look down, you'll find interesting and beautiful rocks and stones.

You can park in the lots at either the Clark Road entrance or the Lane Road entrance.  The circle at the end of Lane Road itself also has access to the trails.

Posted by Lisa Rainsong at 6:53 PM