When You Listen to Katydids, Listen for the Rhythm 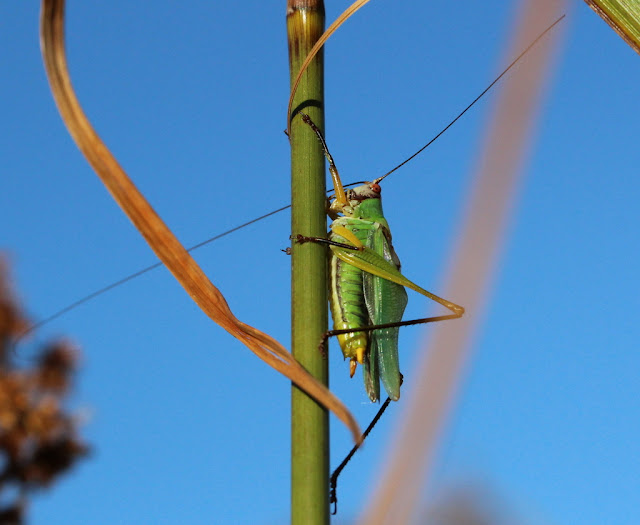 Cricket songs are a combination of pitch, rhythm, and phrase length. In the last post, we listened to tree crickets that sing on similar pitches to those of bird song. Even some of the very high cricket songs were still within the frequency ranges of the highest bird songs.

Not so with katydids. These songs are much higher, and their complex frequencies never sound like clear pitches. These insects are the percussion ensemble of the insect orchestra, so we’re going to focus on rhythm, song length, and dynamics (how loud and soft they sound).

If I want to imitate a katydid song, I'd choose a percussion instrument to create a non-pitched sound and I'd play the insect's rhythmic pattern.
To illustrate, I made a recording using a cabasa (an African/Brazilian percussion instrument) to create a sound reminiscent of the Common True Katydid. Let's see - and hear - how closely I can suggest their  actual songs. 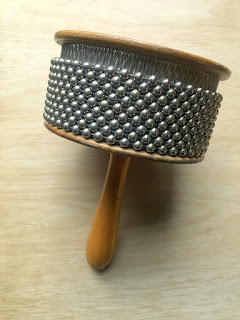 Next, let’s look at the frequency range of katydid songs. (If you’d like a review of terminology such a frequency and Hz, please refer back to my previous post on cricket song.) The crickets of NE Ohio cover a frequency span ranging from about 2000 Hz (in the Tufted Titmouse range) up to about 7500 Hz (Grasshopper Sparrow and Cedar Waxwing range).

Yes, it’s a fact. Over time, katydid songs become less accessible to our aging ears, though we may not notice right away since people don’t typically pay attention to such high frequencies.

The upper frequencies we do notice are the consonants of human speech. That’s what we first begin to lose when we become aware of a decrease in our hearing. Those missing consonants are much higher than vowels.

I created the example below to illustrate the frequencies of some of the highest consonants – the ones that sound similar to katydid songs. It's a recording of yours truly making consonant sounds such as “tic-tic-tic,” “tsit-tsit-tist” and both light and more aggressive high hissing. The frequencies approach those of many katydids; I even managed to get above 10,000 Hz at times.

But the last thing I want to do is discourage anyone before I’ve even gotten to my first katydid species. I’ll start with the katydid that has the lowest frequency song and is also quite loud: the Common True Katydid. 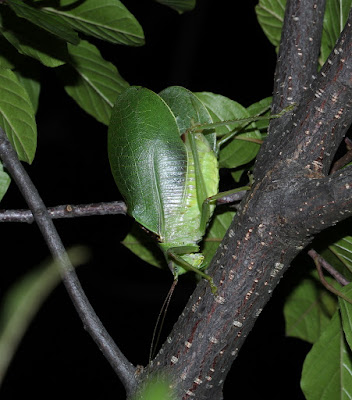 When people think of katydids, this is the species that comes to mind. The rhythm of their raspy songs suggests “Ka-ty-did! Ka-ty-did!” or “Ka-ty! Ka-ty!” and sometimes “Ka-ty did-n’t!” if it sounds like four syllables instead of two or three.

Look at the frequencies represented by the sonogram of the Common True Katydid recording. (Keep in mind that “frequency” refers to pitch, not how often the song occurs.) The loudest frequencies of this song start at around 3000 Hz, which is right in the range of the tree crickets. But what a difference in the tone quality!

That’s because there are so many overtones, or harmonics, above the lowest frequencies of the song. Simple bird songs like those of the Black-capped Chickadee appear as a solid, bright, narrow, white lines on the sonogram. Compare this with the White-breasted Nuthatch's buzzier, raspier song. There are many more overtones visible in the fuzzy, wide, dense image.

Look again at the Common True Katydid’s song: those overtones extend almost to the top of that five-year-old human’s hearing range. While few of us will hear all of those overtones, we will perceive this song as a dense, raspy, percussive sound rather than a clear pitch.

Now compare the clear pitch of a Broad-winged Tree Cricket to the raspy sound of the Common True Katydids. You'll see from the sonogrm that the katydid's overtones extend far up toward the limit of human hearing, even though the main frequences are in the same range as those of the tree cricket.

Let’s stay with the Common True Katydid for a little longer. 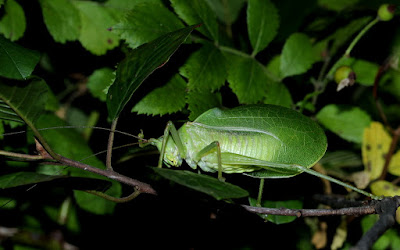 I’ve talked about the frequency range and the tone quality of his song. I’ve said that it’s loud, but you probably already knew that. I’ve also used a mnemonic device to indicate the rhythmic pattern: “Ka-ty-did! Ka-ty! Ka-ty!”

Do you remember my very important point about how temperature affects cricket songs – that these songs are faster and higher when it’s warm and slower and lower in pitch when temperatures are cooler? The same applies to katydids.

We don’t hear the pitches as clearly because they are high and complex (all those overtones), but we’ll still notice that they seem lower – or even just easier to hear – when temperatures drop. But even more than pitch, it's the tempo  that will be the primary indication of cool temperatures slowing down the insects’ abilities to produce songs. 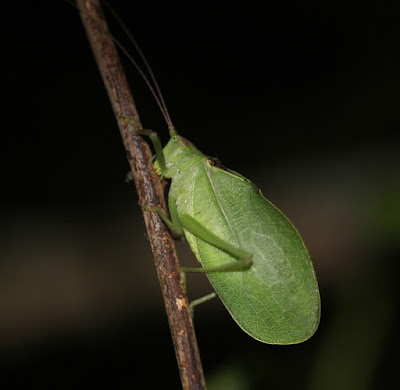 Listen to the Common True Katydids in the first half of this recording. You likely can hear how fast they were singing on that 84-degree evening. But in the second half of the recording, it was only 55 degrees.  It sounded like they could barely move their wings as they groaned, “I’m so cold. Freezing! Freezing!” Late in the season, it’s “I’m still here.” “So am I.” “Me, too.” “Bare-ly.”

Here's another example. The Sword-bearing Conehead's song is a seemingly endless, rapid string of “tst-tst-tst-tsts.” But when the temperature drops down to about 60 degrees, the tempo gets significantly slower until he finally…just…stops. 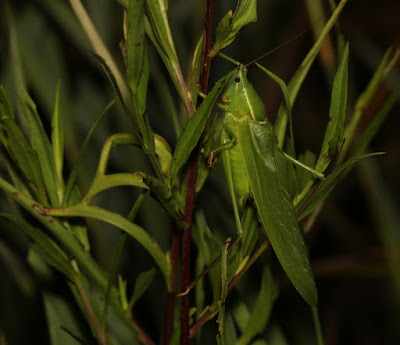 The entire singing insect chorus– crickets AND katydids together – will speed up and slow down as an ensemble. The pitch drops as well, but it’s the tempo change that will be immediately obvious.


Although we can’t clearly identify the pitches of katydid songs, there is considerable variation in the rhythm and complexity.

The Fork-tailed Bush Katydid has a very simple song: it's basically just “Pffftt!” followed by a considerable pause, then another “Pffftt!” 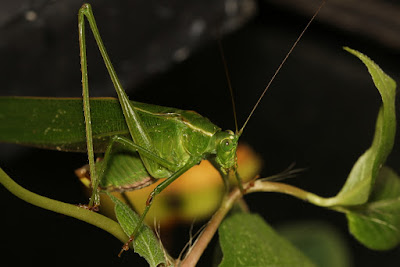 The Greater Angle-wing's song is a series of “tic-tic-tic-tics” that starts slower and increases in speed towards its conclusion as his wings move closer together. Again, look at the sonogram. He can also make an emphatic “Tsit!” call. (The two-layer image shows the volume level- amplitude - in green and frequency in rose/orange.) 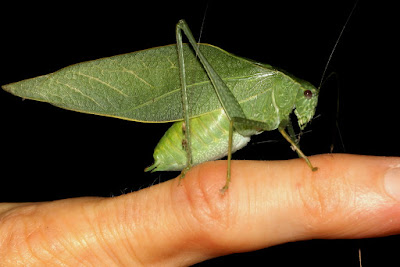 The Northern Bush Katydid has a complex song that some of us may find quite difficult to hear because it's very high. 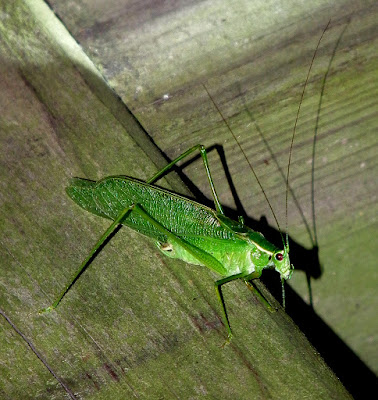 Listening for rhythmic patterns is very helpful with all but the smallest katydids. For example, a meadow or meadow edge will likely have an abundant number of conehead katydids. Cleveland/Akron and east will have a plethora of Sword-bearing Coneheads and also some Round-tipped Coneheads (a southern Ohio species that has moved north into our area). Lorain and Medina counties will have Nebraska Coneheads as well.

A reliable way to visually distinguish between conehead species is to look at the shape of the cone at the tip of their heads and then determine how much black is on that cone. You’d need to do that at night, and the coneheads would need to allow you to get close enough to inspect their cones. I can assure you they will have no interest in assisting you with this. 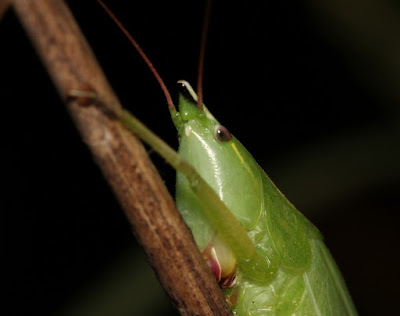 Or…you can listen to their songs from a respectful distance so they don’t drop head first (really, cone first) into the vegetation or indignantly fly away.
Listen for the rhythmic pattern: a rapid, non-stop “tst-tst-tst-tst” (Sword-bearing Conehead), a continuous, penetrating, electrical buzz (Round-tipped Conehead), or a steady alternation between abrasive buzzes and pauses (Nebraska Conehead).

Songs will be very helpful for other species that are visually similar. The Rattler Round-winged Katydid and the Oblong-winged Katydid resemble each other and can be found in the same understory and woodland edge habitat. The Oblong-winged is larger, has a very dark stridulatory field, and has longer wings, but you may not be able to see the katydid at the most helpful angle to observe all his details. You also are highly unlikely to have the two species next to each other so you can compare size. (Have you ever wondered if you’re looking at a Downy Woodpecker or a Hairy Woodpecker? And did they pose next to each other to make it easier for you?) 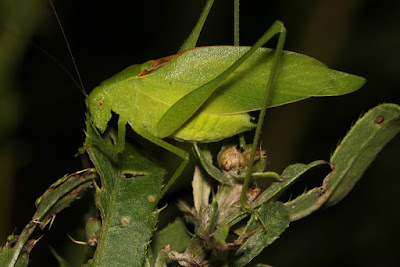 If the katydid is a male, the song will answer the question. If you see a female, perhaps you’ll hear a nearby male’s song. If you've identified him by song, compare her size and shape to his. It will be similar.


The first song is the Rattler Round-winged, and the second song, which is short and emphatic, is the Oblong-winged. 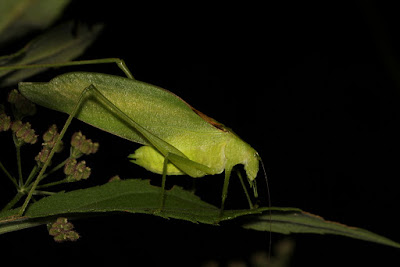 The Scudderia bush katydids often look very similar, and the songs take a little more time to learn. There’s hope, though. You’ll be able to tell them apart with a little time and practice. This recording illustrates one song possibility each from two very common species: the Curve-tailed Bush Katydid and the Texas Bush Katydid. They can be found together in the same meadow habitats in late summer into the fall. 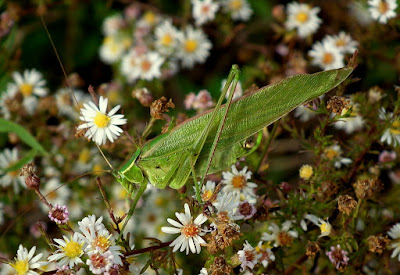 Meadow katydids are smaller than the others I’ve discussed, and their very high songs can seem inaccessibly soft to our ears. Those in the genus Orchelimum can be differentiated with a little practice not only by song but also by habitat and season. We only have two widespread species –the early-summer Gladiator Meadow Katydid followed (and eventually replaced) by the widespread Black-legged Meadow Katydid. Common Meadow Katydids actually not common, in fact, but you're probably more likely to find them in Medina and Lorain counties. 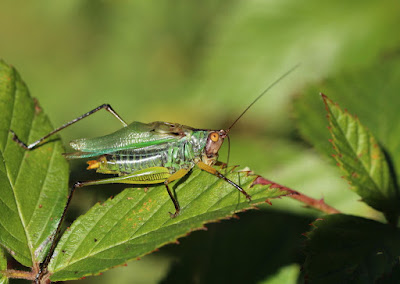 The diminutive meadow katydids in the genus Conocephalus will be a greater challenge because their songs are even lighter and higher. In addition, they all sing a variety of tics and whirrs, and their upper frequencies may extend above what even young humans can hear. Fortunately, these katydids are active during the afternoon as well as at night, so you’ll be able see them even if hearing them is difficult. The most common species in our area is the Short-winged Meadow Katydid. 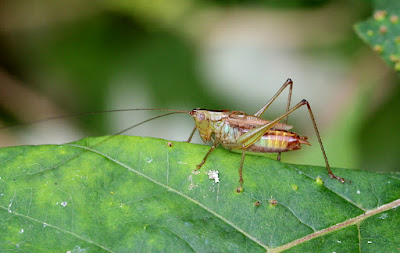 There are other gorgeous and intriguing katydids that I haven’t mentioned in this introduction to listening, but be assured that I’ll discuss all of them in subsequent posts.

For now, three important things to remember are:

You’ll need to listen for the rhythm, because you won’t hear their complex, percussive-sounding songs as musical pitches.

They sing faster when they are warm and slower when colder. On a chilly night, they can almost sound like a different species.

They don’t all sing in the same habitat, and some sing earlier in the season than others. This will help limit your choices.

And finally, as with birdsong: please don’t try to learn all of them at once! Start with the most common and most audible. Add more each year, and expect that you’ll need to review the ones you learned last year after you haven’t heard them for many months. You probably have to review some of the songs of migrating warblers in the spring, don’t you?

In a year or two, you’ll walk out on a summer evening, hear an ensemble of crickets and katydids, and recognize the primary instrument groups. Eventually, you’ll find you know most of the individual musicians. Summer and early autumn will never sound the same! 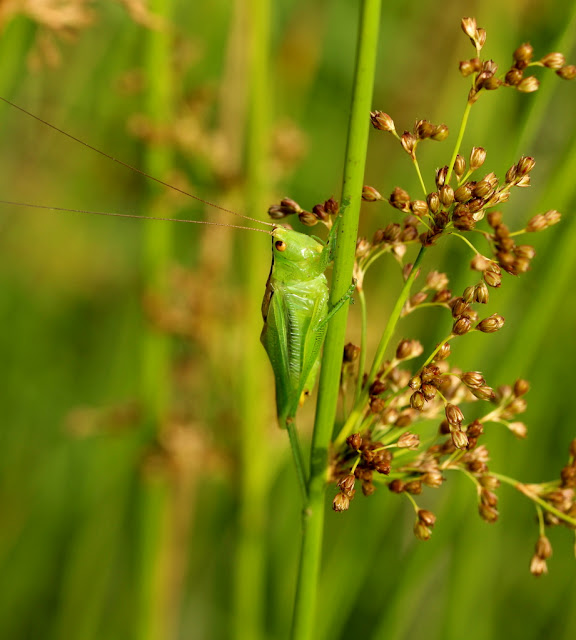