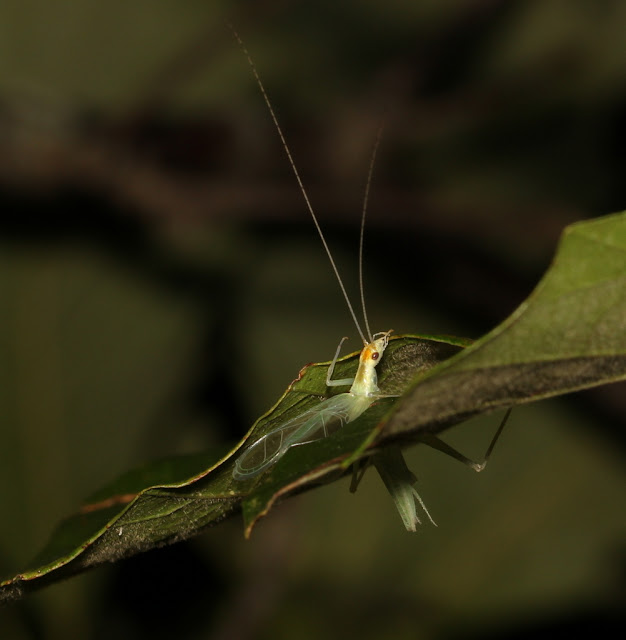 Narrow-winged Tree Crickets (Oecanthus niveus) are a common singer in NE Ohio. I know them well. I’ve found them singing between two leaves in many small trees, lower down in larger ones, in vines and shrubs, and even occasionally in meadow vegetation. 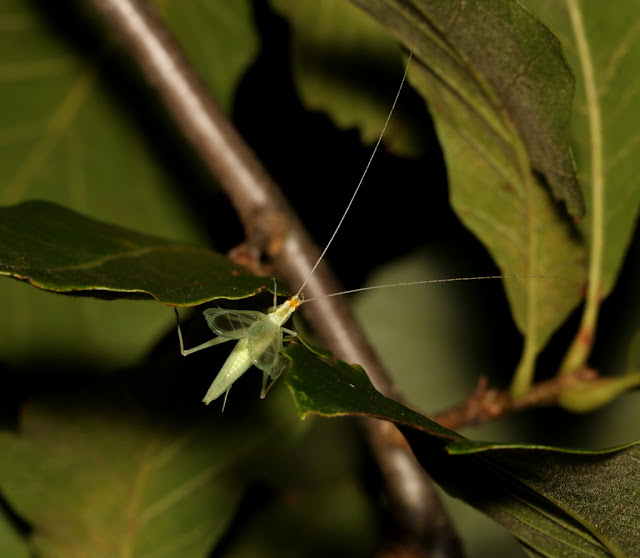 In more urban areas such as where we live, they often sing with the Snowy Tree Crickets in our yards. (In fact, I'm listening to both species outside the window as I write.) It’s easy to tell them apart, as the Snowy Tree Cricket’s short, rhythmic, chirp-chirp-chirp song is easily distinguished from the slightly longer songs of the Narrow-winged.

Their wings do seem a little more narrow than other crickets in their genus, and they have reddish or rich orange caps on the tops of their heads. 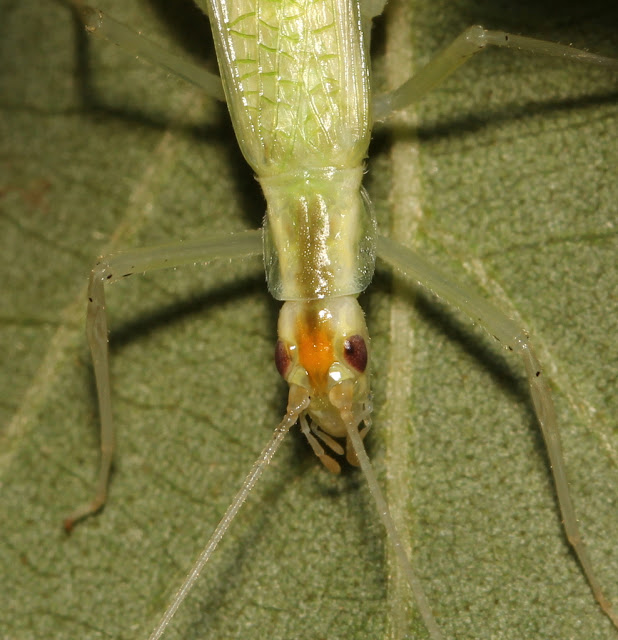 And then there’s the antenna spots. That’s the reliable way to tell these Oecanthus genus cricket species apart. Not that they are happy to show their little antenna spots to me - or to you. It’s a challenge to get close enough at just the right angle! 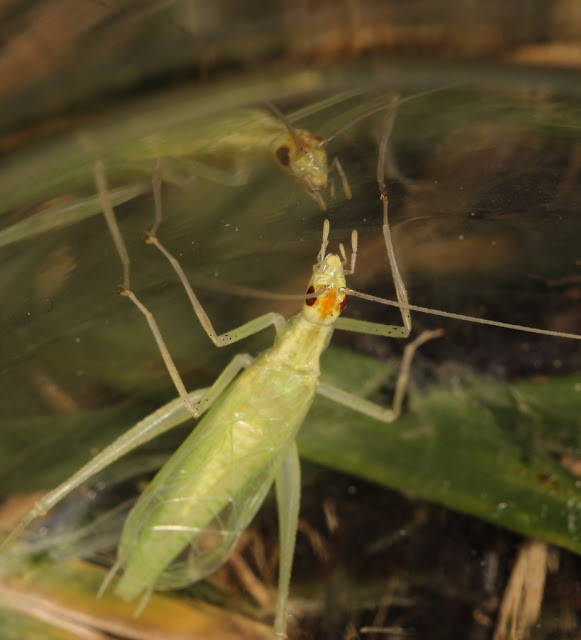 I haven’t been too concerned about that, though, because I know my Narrow-wingeds. The red spots on their heads are obvious enough, and when I've checked the antenna spots, they clearly curve to form either a forward or reverse “J.” 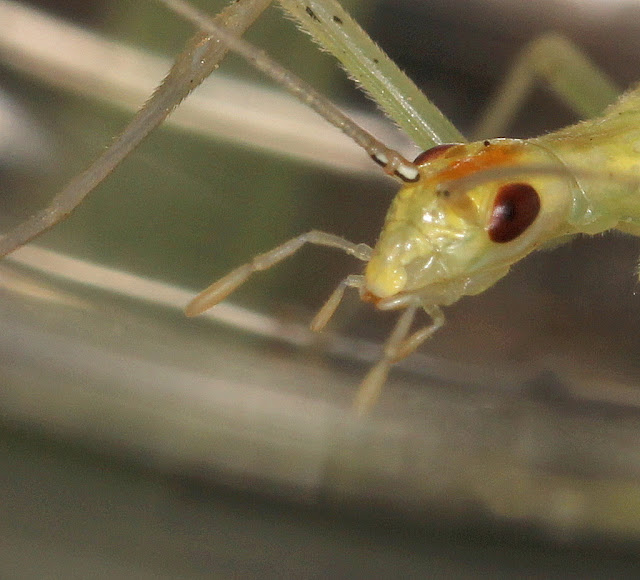 Davis’s Tree Crickets are another matter, however. They're not nearly as common as the Narrow-wingeds, and I don’t generally come across this species. They live up in the trees, far out of reach of anyone who wants to see them at all, not to mention look at their antenna spots. The Latin name is Oecanthus exclamationis, because the spots form an exclamation mark! But again, that’s if you can:

a. find a Davis’s Tree Cricket
b. get one down from the trees so you can look closer
c. maneuver him so that you can see his antenna spots.

Just listening, though, shouldn't be a point of confusion. Their songs are longer with more erratic pauses than those of the Narrow-winged Tree Crickets. The Singing Insects of North America web site describes the Davis’s songs as “a melodious trill irregularly interrupted, usually briefly and often after the trill has continued without interruption for >5 sec.”

The Narrow-winged's song, however, is “a melodious trill interrupted briefly at intervals of 5 sec or less. Interruptions are not synchronized, so when several males are calling the sound becomes continuous. Easily confused with the songs of two-spotted and Davis's Tree Crickets, but trills by these species are interrupted at longer intervals and have faster pulse rates.”

This all played out in a most unexpected manner at Bath Nature Preserve in Summit County, Ohio, where I’m doing a cricket and katydid study for the University of Akron Field Station this summer. The parking area's small trees are exactly the size that Narrow-winged Tree Crickets often seem to prefer. There are two young swamp white oaks, a pin oak, a sweet gum, and what might be a crabapple, though I’m not entirely sure. 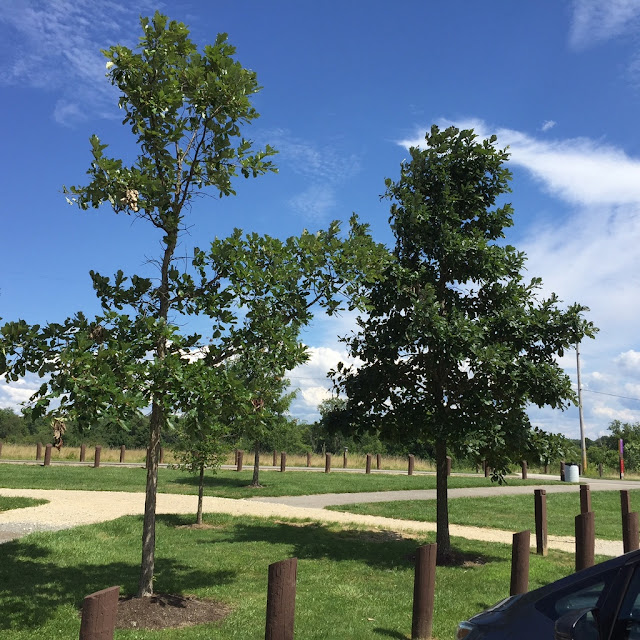 Those Narrow-wingeds were singing up a storm in the two swamp white oaks. I couldn’t get too close to the actual singers, but I saw a couple of females that had red head patches, and the males were singing the repetitive songs of the Narrow-wingeds. It sounded a little lower in pitch than I might have expected, but I didn’t have any for a comparison. The phrasing was what I expected for Narrow wingeds.


I took some photos shooting upward from below the singers, and declared them to be Narrow-wingeds. After all, that’s who the females were. Here are some antenna spots of the individuals I checked – I think you can see how they curve to form the diagnostic forward or reverse “J.” 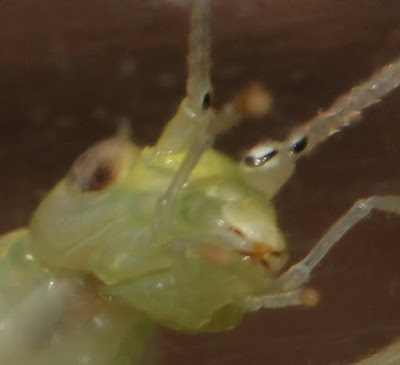 Imagine my surprise when it was later brought to my attention that  the two loudest singers might actually be Davis’s Tree Crickets!

What? No, really? But Nancy Collins, who has specifically studied tree crickets for years and even discovered a new species, encouraged me to take a closer look at my singers.

Somehow, I would need to find the antenna spots of crickets who were singing in the dark up in the trees

I wasn’t entirely committed to putting a step ladder in my little car and pulling it out in the parking lot, so I was going to have to try using my insect net very gently in the branches. I feel strongly about being sensitive to insects and returning them unharmed where I found them, so the net was going to take some maneuvering. 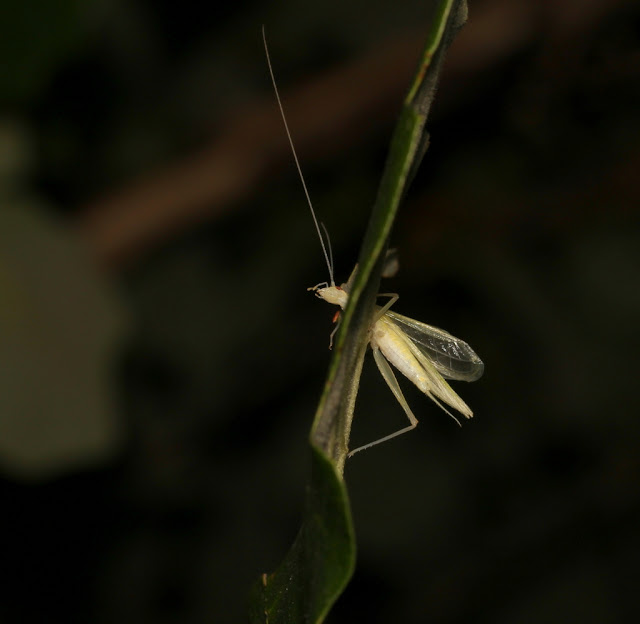 And I succeeded! I got the singer I had recorded, and…here are his antenna spots: 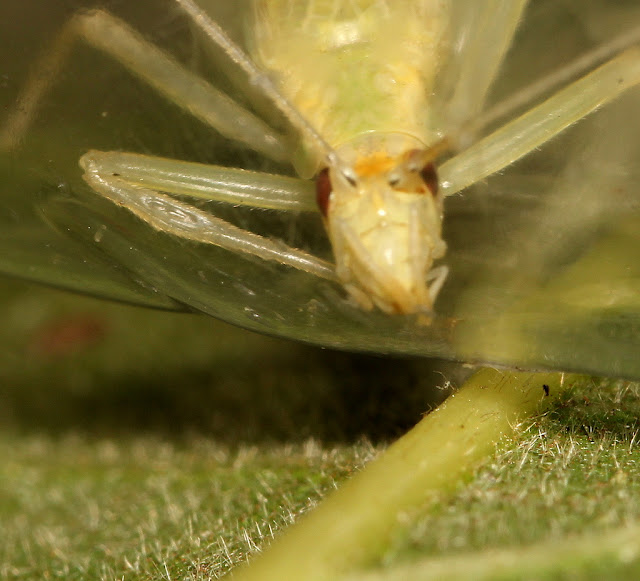 So… both Narrow-winged AND Davis’s are in these little trees! I checked some additional crickets, and I did indeed find both species, including singing males. My species confirmations came through recording a singer, catching him gently in one of my trusty Parmesan cheese containers... 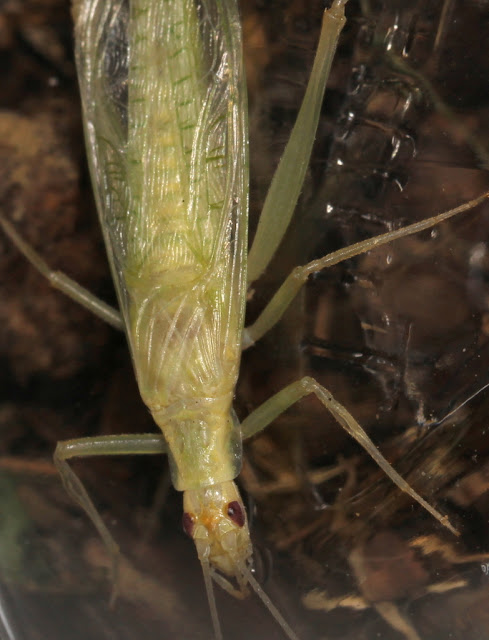 ...and then trying to get the right angle for an antenna spot photo. 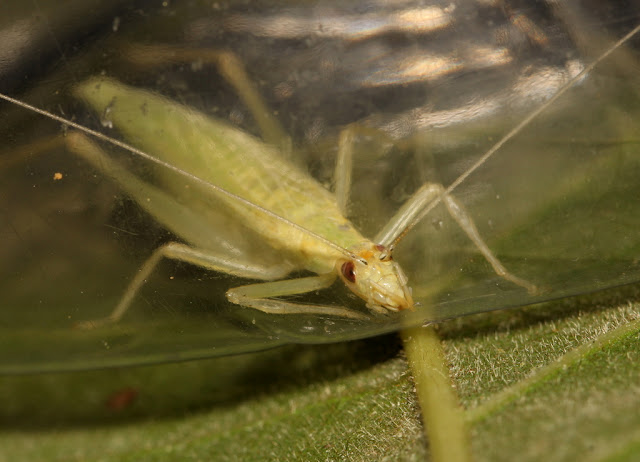 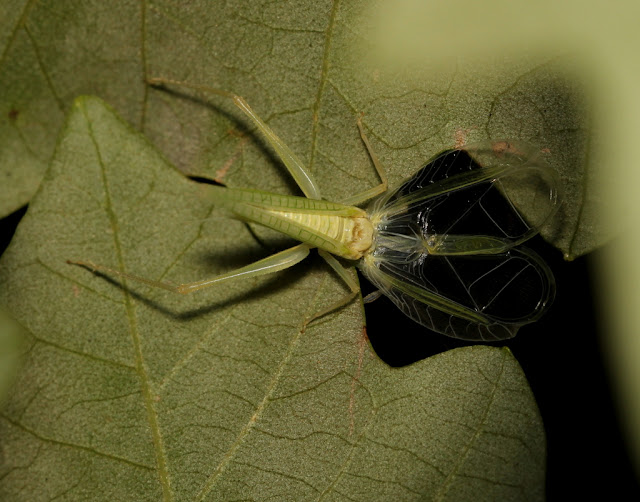 If there’s just one species singing, though, I won’t have the benefit of comparing the pitch relationship between them.

Remember, too, that all of these crickets sing lower and slower when the temperature is a little cooler, and warmer and faster when it’s warmer. The pitch of their songs will vary even during the course of an evening as temperatures change, and I'll need to learn how the relationships change as that happens.

But now I know that Davis’s Tree Crickets don’t always sing longer songs with erratic pauses. They can sing with a steady rhythm that is similar to the Narrow-winged Tree Crickets. Here's my initial recording that you heard earlier:

They don’t have to be high up in the trees, either, though that’s their common habitat. Why do those little swamp white oaks in the parking lot please these Davis's? I have no idea. 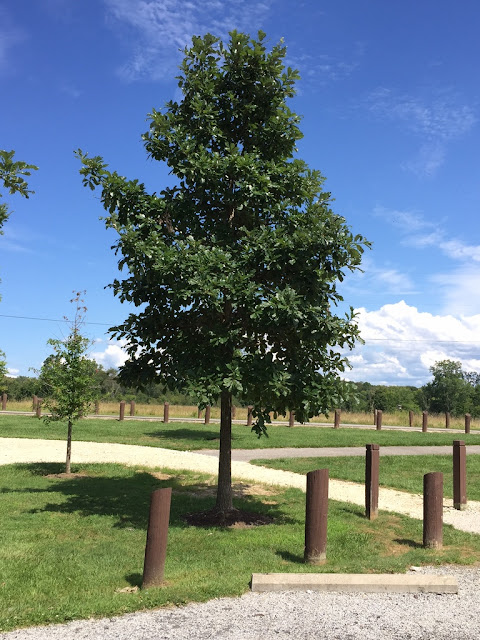 In time, I hope to be able to reliably identify Davis’s Tree Crickets by ear, even if there are no Narrow-wingeds with which to compare them. But for now, this is a new - and interesting – project, and Bath Nature Preserve is the place to study the songs. 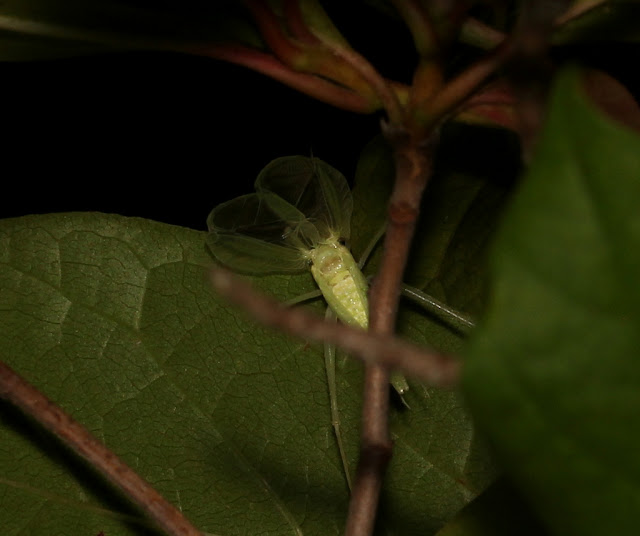