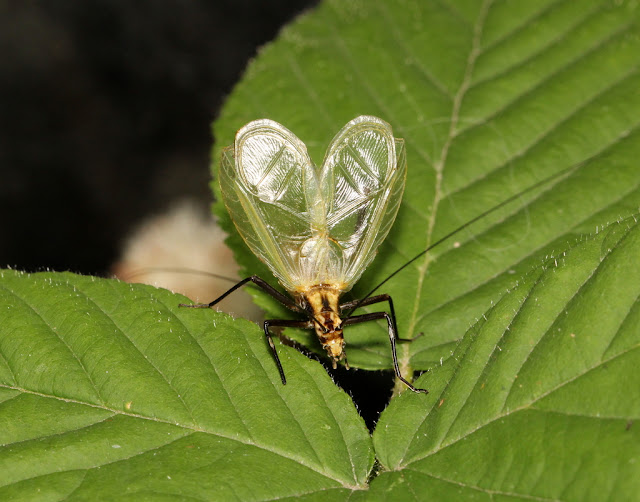 The old Snowy Tree Cricket who was the subject of my last post may have outlived his annoying roommates, but you haven’t heard their stories yet. (The Snowy, by the way, was still singing on 12-12-15!)


Here is the individual who annoyed him: a male Black-horned Tree Cricket. 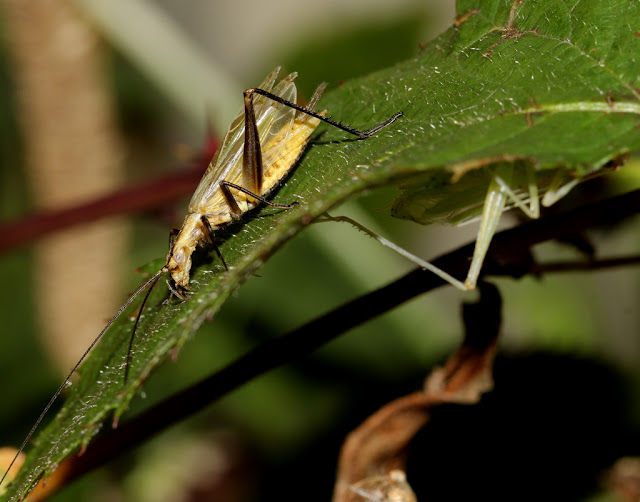 You might think the species would be obvious, considering his black accents, black legs, and black “horns” (antennae). Until recently, so did I. 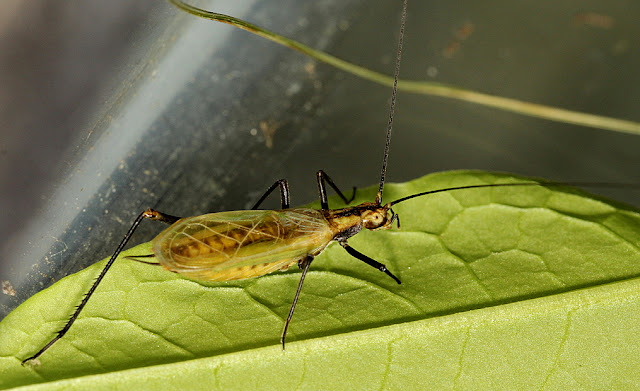 There’s another possibility I’ve learned I must consider, which is the Forbes Tree Cricket. The two species look identical, and they can only be separated by the number of pulses per second in their songs. I didn’t think I had to concern myself with this possibility. Illinois is Forbes. Indiana is probably Forbes. But north central and northeast Ohio? Black-horned, of course.

Except maybe not. I have heard both songs in the same locations in north central Ohio around the Sandusky Bay area that I referenced in my last post, and it seems that I have a recording of a Forbes from as far east as Geauga County. I have a lot of sound files to edit and compare this winter to try to begin sorting out who is where and how much overlap exists.

Mr. Annoyance’s pulse rate suggests that he may actually be a Forbes Tree Cricket, but while I'm learning about temperature and pulse rate in my recordings, I’ll leave him as a Black-horned Tree Cricket for now. It does not affect his story whatsoever.


The Black-horned would occasionally sing in the terrarium, but his primary commentary consisted of little bursts of song at anyone who got in his way. It seemed that he was telling the other cricket (regardless of species) to get out of his space.


He was missing his right rear leg and the bottom of his right front leg (the tarsus, I believe). These kinds of losses are common in old crickets and katydids, but they did not diminish his mobility or his attitude. 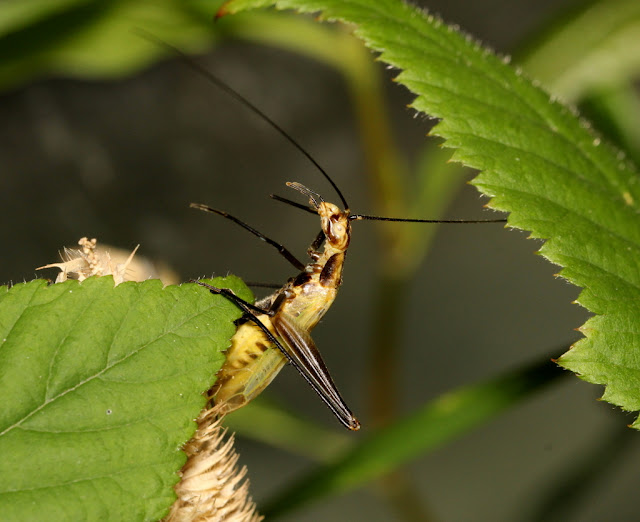 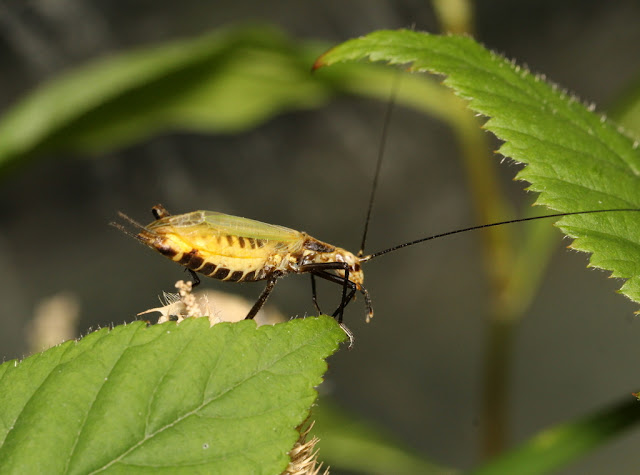 He was especially committed to making the Snowy Tree Cricket move off the Snowy’s favorite leaf (whichever one that happened to be at any given time).  I’d often see little standoffs like this: 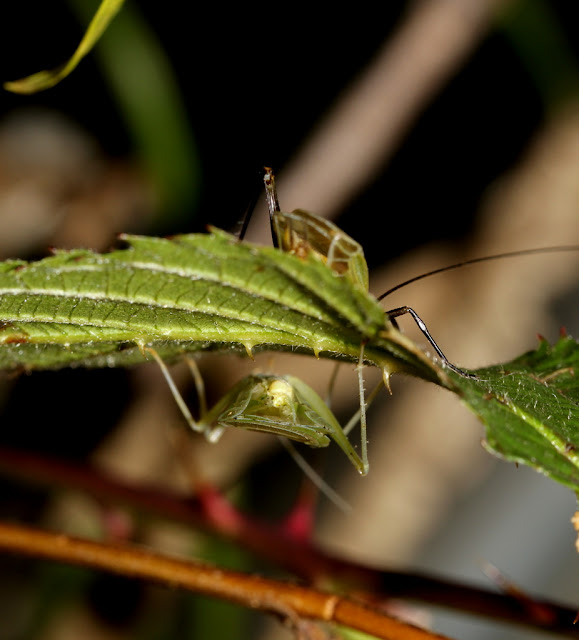 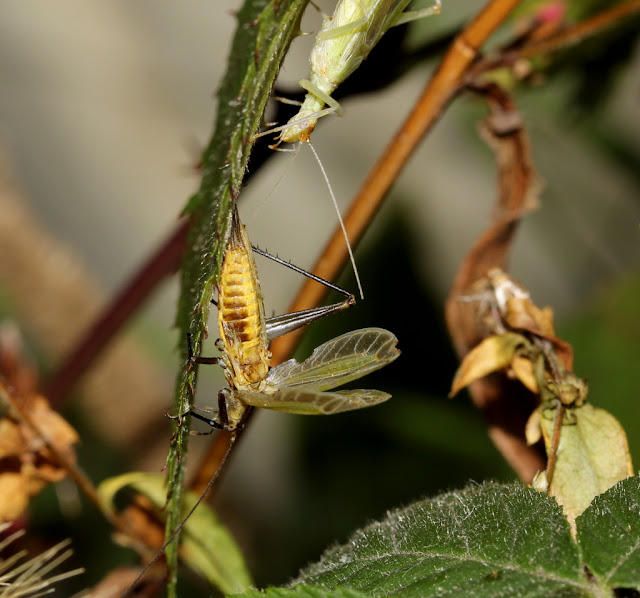 He’d repeatedly touch the Snowy with his antennae, and he’d sing little bursts of song. He behaved like an absolute nuisance sibling. The Snowy, however, would not move for him and would even continue singing while being harassed by the Black-horned. In the photos below, he moved the Black-horned out of his way! 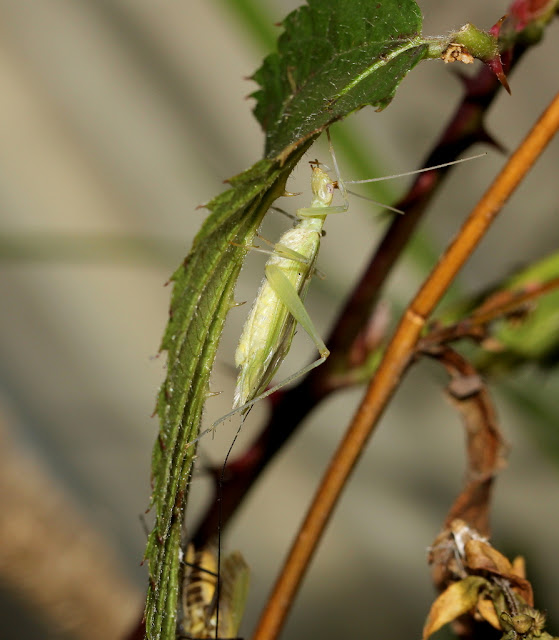 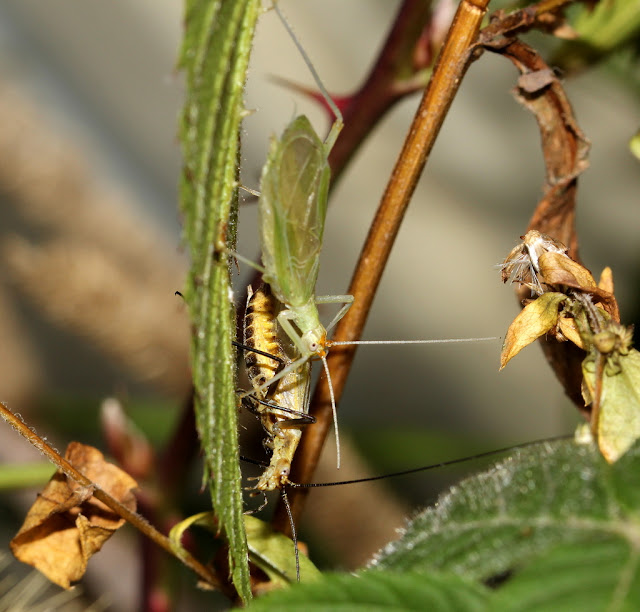 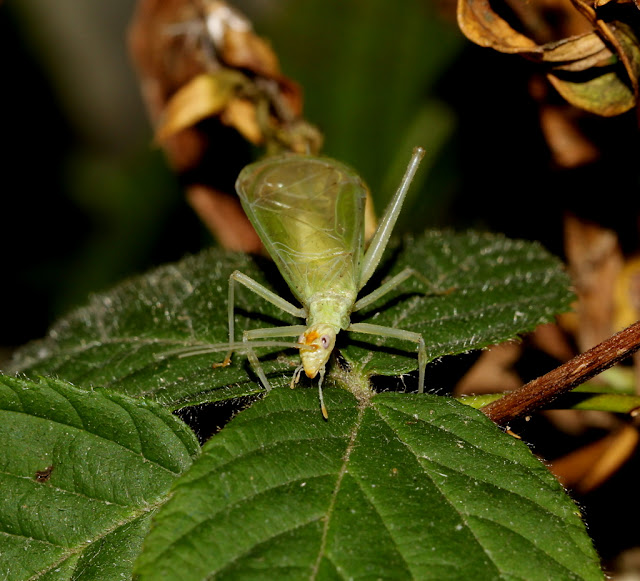 This is a large terrarium with lots of vegetation across the top level just below the screen. As far as I could see, there was absolutely no need for this behavior. Was it actually common in the field, but not something I could easily observe? Or was this just the behavior of one individual cricket?


His attitude was quite different to the Four-spotted Tree Cricket female. 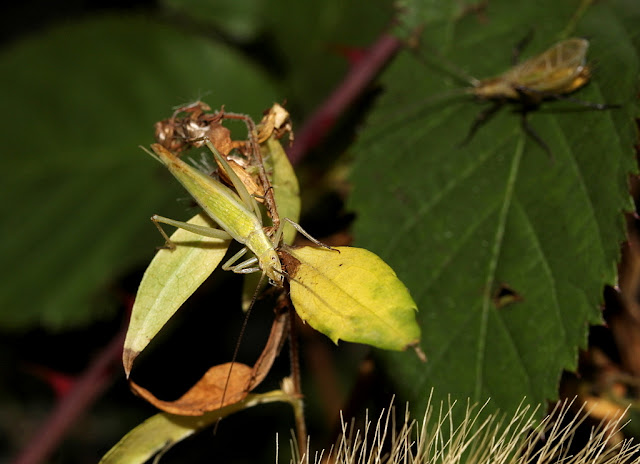 She had arrived in some vegetation I’d scooped up in my Parmesan cheese container when I caught the male Four-spotted. The Black-horned decided he would court her, and followed her around, singing little bursts of song similar to what I hear when a female Black-horned is in close proximity to a male. (The song is quite short, so I've pasted it two additional times in this track so you can hear it without too much space between songs. And yes, that's the Snowy on the underside of the leaf.) 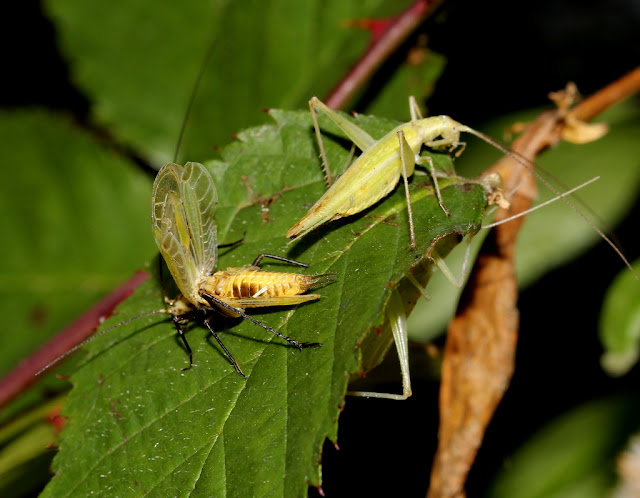 When she actually seemed to attempt to oviposit in one of the terrarium's blackberry canes, he stood over her, singing and guarding her as if he were somehow responsible for this event!

The Black-horned Tree Cricket lived for quite a while, and it was always interesting to see where he might turn up in the terrarium. Tree crickets hide under leaves quite a bit, and I might not see him for a couple of days. Just when I’d think he’d finally passed on, there he would be –up on top of a leaf - and I’d looked right over him! 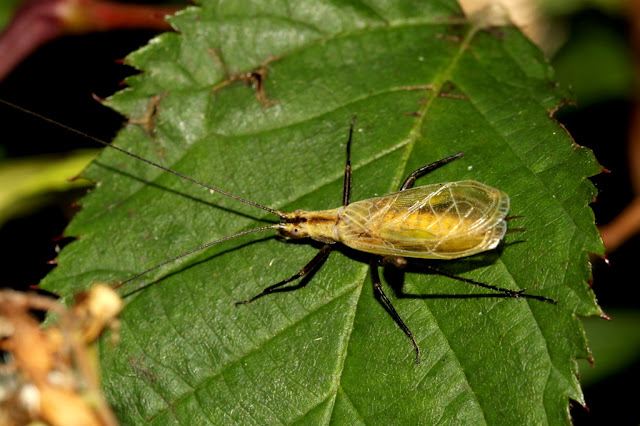 Last year’s Black-horned Tree Cricket was committed to courting the male Short-winged Meadow Katydid. This year’s male was far more interested in the other tree crickets than they were of him. I’ll have to observe one or two next year and see what happens!