When I first began studying bird song quite a few years ago, I would try to write down anything I didn’t recognize.  Being a musician, I would scribble some staff lines, draw a treble clef, and notate what I heard.  I was perplexed that when I went back to the audio field guides available to me, I couldn’t find the songs.  It was odd – they seemed pretty simple and were repetitious enough that I could easily write them down.  But I couldn’t find them.  I eventually threw away my notes. 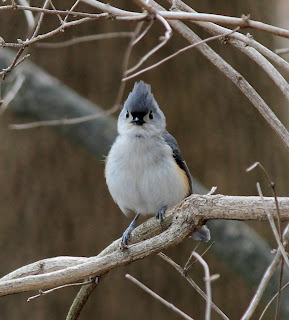 In retrospect, they were probably all Tufted Titmice.

Although spring migrants will soon be pouring into NE Ohio at last, the Titmice have been the predominant voice in the woods for over two months now.  Many of you may know that Titmice can sing more than one song, and you may recognize some of their variations.  When people first learn the Tufted Titmouse “song,” however, they probably learn this one:

There are some that are common, but you may occasionally hear one that it pretty unusual!  I'll demonstrate with some examples from the Case Western Reserve University Farm in eastern Cuyahoga County and the Holden Arboretum in Lake County.

I’ve heard this first song at Holden in previous years, but this year I heard two kids in the parking lot enthusiastically imitating the bird as he sang.  They were so pleased with the song that I’m sure their mom heard it over and over again for the rest of the day and evening.

Some songs seem to be specific to an area, and there appears to be a Holden Titmouse repertoire.  This unusual repetition is another song I hear at Holden.

Another song I hear at Holden but many other places as well is what I call the “hoarse Titmouse song.”  Titmice can switch between this tone quality and a clear sound in an avian heartbeat – it’s not as if the bird is suffering from vocal abuse.

My favorite bizarre Titmouse song is this one from the CWRU Farm.  I first heard it at the entrance to the Farm property, and pretty soon it began to spread to other Titmice.

If one Titmouse knows a song and another does not, the one with the smaller repertoire sounds less impressive to the females.  The males all need to have a wide repertoire, and every Titmouse at the Farm would need to learn the new song.  And they did!  It only took several weeks for this song to sweep the entire 386-acre property.

A Titmouse will change songs in response to another singing male.  In the example below, you will hear the Titmouse switch to a new song. Either he has to match a song that he hears another male sing, or he changes to a new song and the other male must match his new song.

When Titmice really challenge each other, they will match songs and sing right after each other so that their songs almost overlap.  The closer their songs become, the more intense the confrontation. You may actually see them come closer to each other, and in extreme cases a physical fight may follow.  They will continue to sing, scream, and scold while they slap each other with their wings and peck at each other down on the ground.

I find it endlessly fascinating to listen for all the Tufted Titmouse songs I've come to recognize, to discover new ones I haven't yet heard, and to listen for possible regional variations in repertoire.  Best of all, though, is listening for the drama of Titmouse interactions and seeing if I can follow the unfolding story! 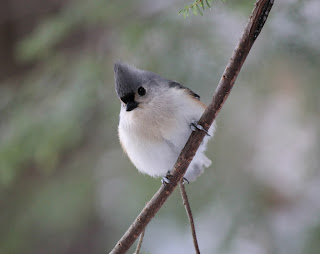