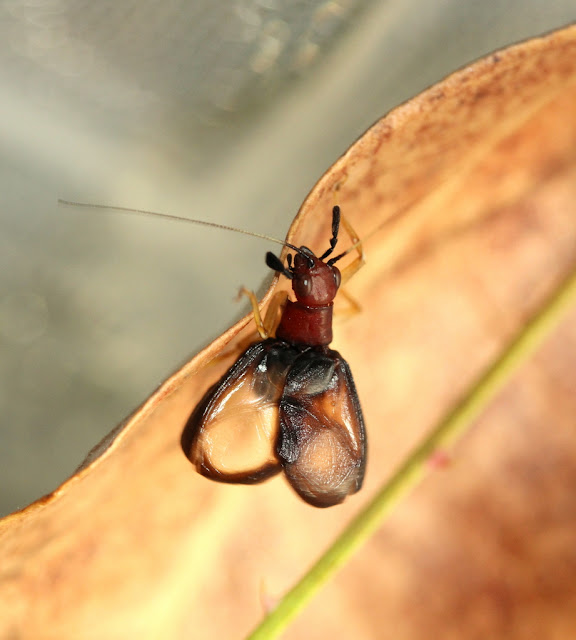 NE Ohio has just had another period of cold rain mixed with snow and high wind. Temperatures will be moderating this coming week, but I’ll be surprised if I find more than a small number of the hardiest ground crickets still surviving outside now. The cricket stories continue in our little bungalow with its collection of terrariums lined up next to the sunny, south-facing windows. Ground crickets, tree crickets…and this tiny beauty: 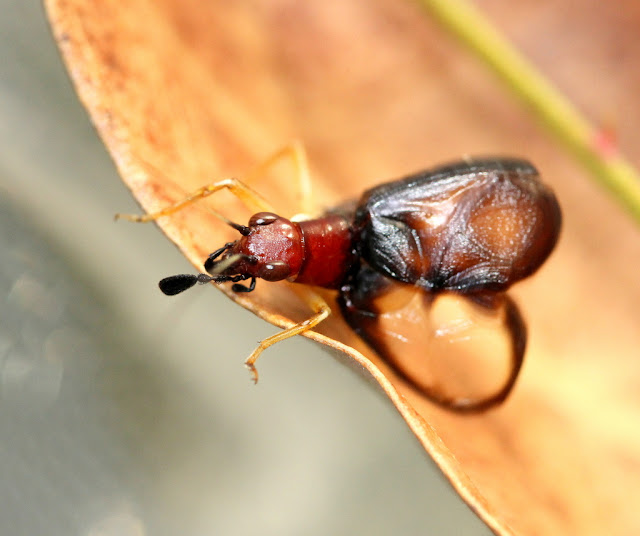 I’d hoped all summer that I could catch one to listen to and study more closely, but there were so many other crickets and katydids to study outside that I just didn’t have time to follow up on that particular interest.

I waited too long. Many leaves came down in the first round of cold, wet, windy weather, and I didn’t hear any remaining Handsome Trigs anywhere I went.

These crickets live in vegetation, not on the warm earth under the leaves with the ground crickets. When the leaves fall from the shrubs and blackberries they typically inhabit, they seem to fall with them. In late October, I’ll hear them singing from leaves on the ground, still hidden on the underside of a leaf or in one that is curled up into a nice hiding place.

By November, though, I really don’t expect to find them at all.  And yet…

I was walking along a trail in Lorain County and heard a single Handsome Trig. I searched for him, guessing he’d be on the ground. Sure enough, he was singing on a dead oak leaf. What was unusual was that he was sitting right on top of the leaf, perhaps to catch a little of the late-day sun.

It was November 5th, and there were no other trigs anywhere. He was the last one. I decided without hesitation that he could finish out his life in the warmth of our kitchen.

I caught him in a little plastic insect container, and he sang from the mesh belt of my backpack all the way back to my car. I put him in a “singing cage” that has very fine, mesh screen. It’s a Tupperware container that has the lids and sides replaces with fine, soft mesh screening. (Many thanks to Wil and Donna Hershberger, who made this for me!) 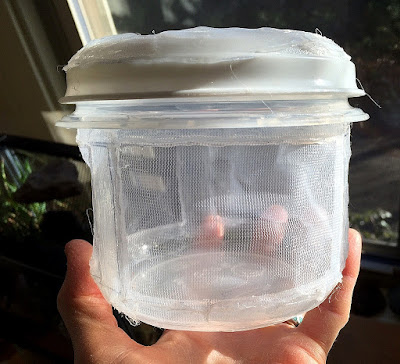 Trigs are tiny, acrobatic climbers and jumpers, and they can escape through very small openings. I know this from personal experience. This container, however, would be safe for him. I included a couple of blackberry leaves and the dead oak leaf from which he's been singing, and we headed east back to Cleveland.

He sang is the car for the entire drive back.

Once home, I further accessorized his singing cage with a half of a grape, a small piece of lettuce, and the tiniest container for dry cricket food I could find (a cat medication container lid). I added another small leaf or two and a few drops of water on the blackberry leaf.

He sang so loud! How could a tiny cricket only 1/4" - 1/3" long fill the entire kitchen and dining room with sound?

The song is not really a smooth, continuous trill. If you look at this sonogram excerpt from the recording above, you’ll see the tiny separations that occur throughout his long serenade. The result is a bit of a crackling texture that separates his song from the smoother song of the Say’s Trig, who is also a common species in NE Ohio.

He sang well into the evening the first couple of days. Later, he seemed to adjust to a more trig-like daytime singing schedule, leaving the night shift to the tree crickets in the large terrarium nearby.

Handsome Trigs are fascinating to watch. The first thing you may notice after you marvel at his bright color contrasts are his wings. The right wing is dark and the left wing is clear. On this elderly individual, the black wing wasn’t quite as dark as it probably once was – more of a brown at this point – but there’s still an obvious contrast. Look closely through the clear wing - can you see his leg underneath? 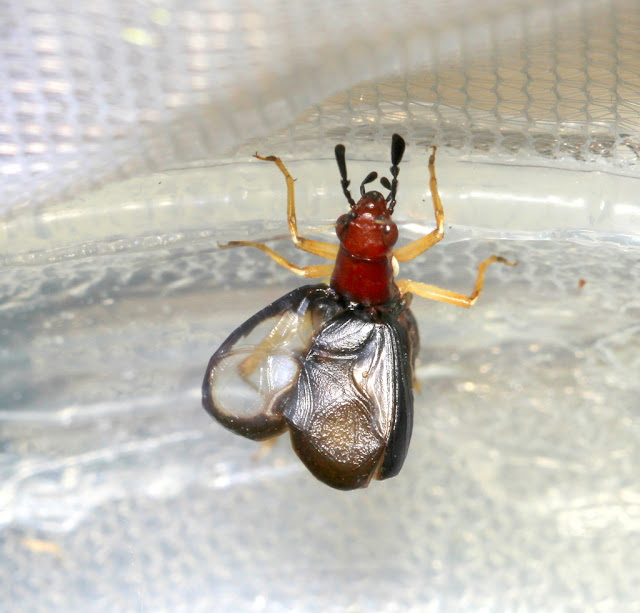 Notice, too, the prominent dark palps extending from his head. He moved then constantly, including while singing. 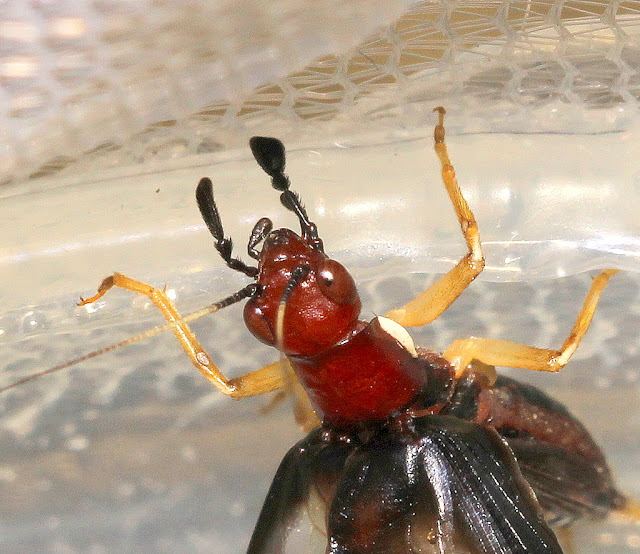 His antennae (though a bit battered) had color variation from dark to light and they, too, were usually in motion. His legs were yellow, contrasting with his red head and dark body. Even in his advanced age, he was a real beauty!

Always thinking of what my resident crickets and katydids might like, I decided to add a small, but sturdy branched twig on which he could climb. That’s what trigs do – they climb, including up the glass wall of a terrarium or up the plastic side of an insect transporter.

But it was the addition of the twig that taught me how well they can jump. Before I could get the lid back on his container, he dashed up the twig and did a flying leap out of his cage and across the kitchen table! Another flying leap, and he was attached to the side of the large tree cricket terrarium on the rolling counter next to the table.

After a couple of additional long jumps, I was able to catch him and return him to safety. It was quite impressive for an old insect who was already missing one of his back legs. How did he propel himself so well with just one of them?
From then on, I opened the container with extreme caution once a day to bring fresh offerings of a grape half, lettuce, and a blackberry leaf with a few drops of water clinging to it. The only other time it was safe to remove the lid was when he was in the throes of song. He would parade around the leaves while singing, but he wouldn’t jump. 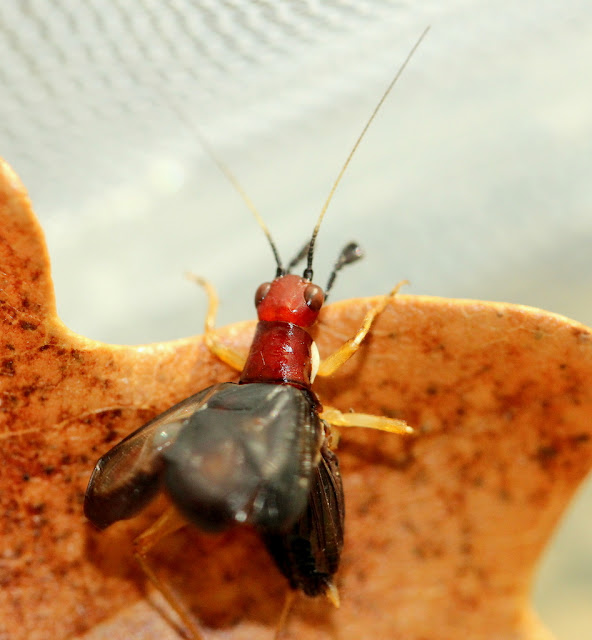 Although he sang with incredible energy, I knew it wouldn’t be a lengthy stay. On his last day, he didn’t seem to have much energy to move. I gently helped him onto a little red maple leaf next to his grape, sadly expecting he would not move from there again. The next morning he was motionless exactly where I’d left him.

I realize that the crickets and katydids I bring home at the end of the season are old, have had their battles, and may even have been parasitized. The longest-lived cricket to date is the female Striped Ground Cricket who lived till January 3rd. In a subsequent post, I’ll write more about the lengthy lives of the ones who hatched out in my terrariums this year.

But for now, I’ll close with my farewell to this wonderful little Handsome Trig who amazed us with his powerful song. 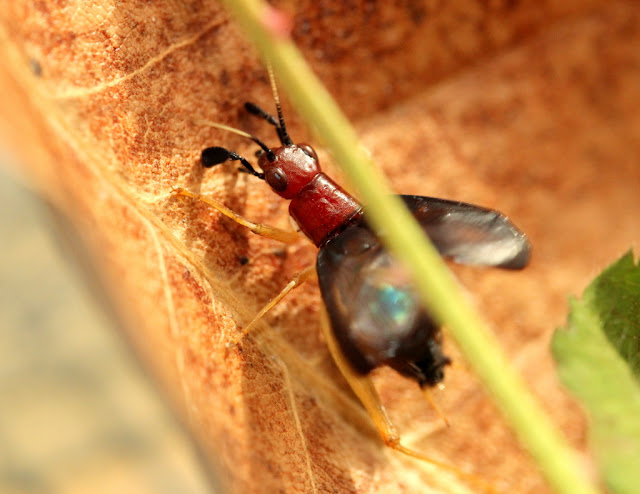 Lisa Rainsong
I am a professional musician, educator, and naturalist. I study the songs of birds, insects and amphibians of NE Ohio and teach people not only to identify them, but also how to listen for their context and interactions. The more we hear of our natural world, the more deeply we will desire to protect its musicians and concert halls. I hope you enjoy sharing my annual journey through the constantly-changing musical texture of NE Ohio's woodlands, meadows, and marshes. There is always music in nature if we're listening. You can read about the educational programs I teach, and my field work at https://www.listeninginnature.com